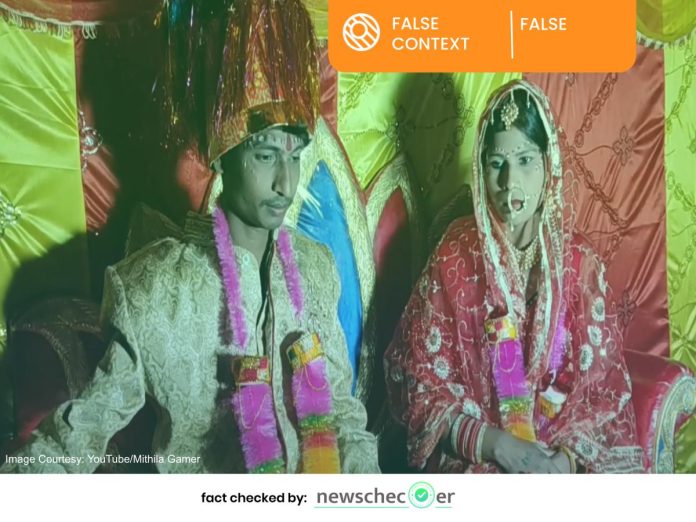 Bihar CM Nitish Kumar recently called dowry one of the vilest practices in society stating that “it is the responsibility of all of us to end dowry and child marriage”. People must come forward and end these social evils, Nitish Kumar said. But just days after the comments, social media has been abuzz a viral video from Bihar allegedly showing a groom demanding dowry.

The video has been picked up by several media outlets including Firstpost and Gulf News, DNA and Times of India.

In the video the groom can be heard threatening to take his wedding party back if the demands stated earlier to the bride’s family are not met. The groom is seen talking to the man behind the camera, saying that dowry is a common practice and only the grooms who don’t get their share of dowry are brought into the limelight while the ones who do, nothing is heard from their families. The groom is also heard remonstrating with the bride saying that if her family could not afford his demands they should not have fixed the wedding with someone of his status.

Several laws have been passed by the state to protect the rights of women and the Dowry Prohibition Act, 1961 is one such act. According to the act both asking for and giving the dowry is a punishable offence. Even though such laws are in place, the custom of dowry continues to haunt the fabric of the state. 20 women were killed per day in India for dowry related incidents in 2020 according to the NCRB report.

To verify the authenticity of the video, Newschecker conducted a reverse image search of the key-frames of the video on Google and found a longer version of the video shared on a Facebook page called ‘I Hate BJP JDU RJD In Bihar’  by Divya Vikram.

‘Divya Vikram’ is a Facebook page with 3,16,315 followers which uploads video content which is centric to Bihar. The page contains short films which re-enact incidents taking place in small towns of Bihar. The video has also been posted by another Facebook page called ‘Vikram Mishra’ who is also a video creator with a following of 1,54,905 on Facebook.

Upon further investigation we found a video from a Youtube channel called ‘Jai Maithila’ in which the same actors as the viral video can be seen.

Newschecker also found social media posts on Vikram Mishra’s facebook page which claimed that the video which is similar to the viral video was made by him and had gone viral.

Newschecker contacted Vikram Mishra who said that the video in question is scripted. “The whole incident is fictional, there is no truth in it,” Mishra told Newschecker, adding that they have made more such videos. When asked about the actors seen in the video, Vikram told us that the video was shot in Sitamarhi with stars Amit and Rani. On the matter of there being no disclaimer on the video, he said, “We have been making such videos already. There has never been any controversy or special discussion situation regarding any video. But this video became quite viral and there was confusion about it.”

Newscheker also found that the video had been picked up by Indian Express believing the video to be true. After a fact-check done by independent fact-checkers, Indian Express updated their story with a different headline. The archived version of the article can be seen here.

The new version of the article can be seen here.

According to the investigation done by Newschecker, it was found that Vikram Mishra is an artist and producer living in Sitamarhi. Vikram’s wife Divya Mishra is also an artist. Vikram keeps on making videos related to humour and social issues along with other artists of Maithili language. Other videos of Vikram and his fellow artists can be seen on YouTube channels like Vikram Mishra, Jai Mithila, Jai Mithila Music, Voice Of Mithila, Divya Vikram, Mithila Gamer, Ashish Mishra and Siddharth Jha etc.

According to the investigation conducted by the Newschecker team, it was found that the viral video of a Bihar groom demanding dowry is scripted.

Vaibhav Bhujang
Vaibhav is a part of Newschecker’s English team, where he spots and debunks all kinds of misinformation, making the rounds on the internet. A Journalism graduate from St. Xavier's College, Mumbai, he holds an M.A degree in Philosophy and an M.Phil from Delhi University.
Facebook
Twitter
WhatsApp
Linkedin
Previous articleNo, This Video Doesn’t Show Tug Of War Between A Russian And Ukrainian Soldier
Next articleWeekly Wrap: Misinformation Around EVMs Tampering, False Claims About Qutub Minar, Peshawar Blast & More