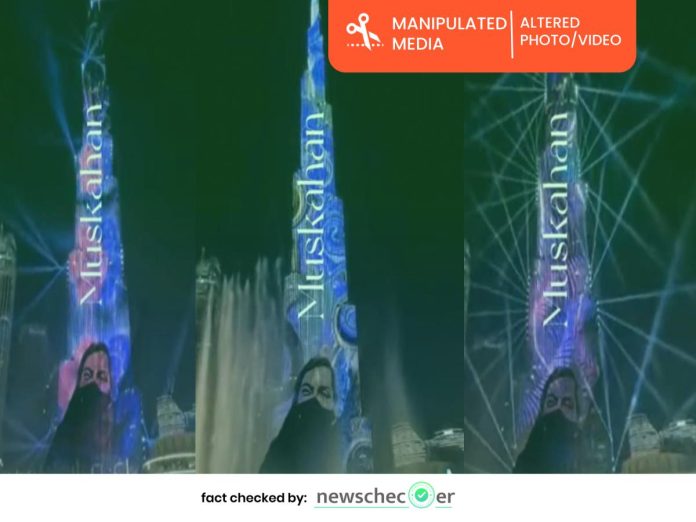 Karnataka has seen protests across the state after several students were denied entry into a school for wearing hijabs. Since then things have escalated further with the matter now reaching the Supreme Court, which has asked the state to handle the matter internally. Social media has become a platform for misinformation since the beginning of these incidents in Karnataka. In light of these incidents a video has gone viral with the claim ‘Muskan’s picture displayed on the Burj Khalifa laser show.’

Newschecker found the video with several captions on Twitter.

Newschecker also found that the video was viral on Youtube.

Muskan has become a household name since she dared to raise slogans against a group of boys wearing saffron shawls heckled her. Earlier in the week Karnataka HC had ordered students not to wear religious attire till the case is ongoing in court. These protests have also gained international recognition with a famous France footballer sharing videos of the protests on his Instagram handle. In a recent development it has come to light that the contact details of the girls wearing hijabs have been made public on the internet.

To verify the authenticity of the video, Newschecker conducted a reverse image search of the key-frames of the video on Google and found no news reports on this issue.

We found longer videos on Youtube uploaded by some users. These videos were from the laser show conducted in Dubai at the Burj Khalifa.

On analysing key frames, we notice that her name has been misspelt as ‘Muskahan’ instead of Muskan.

On further analysing other videos which carry the names of celebrities, we notice that the text usually appears seamless when displayed on the building, but that is not the case with this particular image, where the text stands out from the rest of the elements.

On looking at the keyframe further, we notice that the water sprays from the fountain are not visible at the dark patch of the burqa near Muskan’s mouth, which is unusual. If the image were indeed displayed on the Burj Khalifa, the spray of the fountain would be clearly distinguished against the image of the black burqa that is being displayed on the Burj Khalifa, clearly indicating that the image is superimposed.

Moreover, Newschecker checked the official website of Burj Khalifa but there was no mention of this claim.

Our team also looked through their social media handles on Twitter and Instagram but found no such theme. Whenever there is a special theme, the social media accounts announce the theme before the show.

By our investigation, we can conclude that the image of Muskan along with her name has been superimposed on the existing footage of the laser show at Burj Khalifa. The claims that Muskan’s name and image  was displayed on the Burj Khalifa is not true.

Vaibhav Bhujang
Vaibhav is a part of Newschecker’s English team, where he spots and debunks all kinds of misinformation, making the rounds on the internet. A Journalism graduate from St. Xavier's College, Mumbai, he holds an M.A degree in Philosophy and an M.Phil from Delhi University.
Facebook
Twitter
WhatsApp
Linkedin
Previous article
Indian Techie Rewarded ₹65 Crore By Google For Reporting Bugs? No, Article’s Misquote Figures
Next article
Amid Hijab Row, Old Photos Of Rakhi Sawant In Hijab Resurface