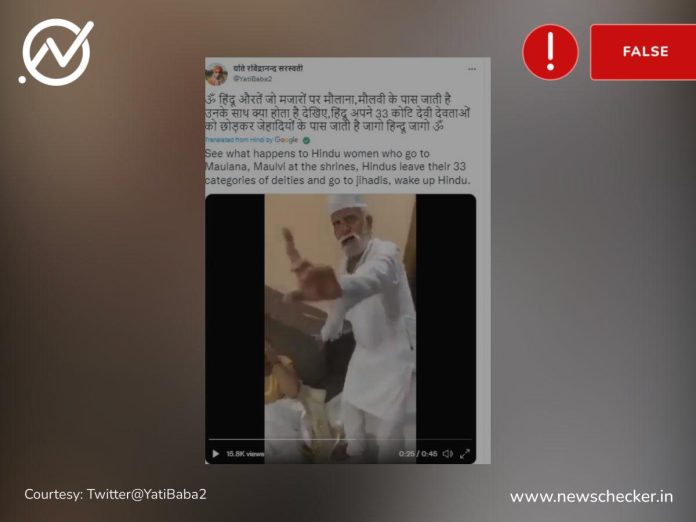 A video has gone viral, alleging that a maulvi was caught red-handed drugging with intent to rape a Hindu women, under the pretext of performing rituals that will help them have a baby.

Newschecker first did a reverse image search of keyframes of the video, along with keywords, which led us to this Facebook video posted on the same day of the claims. The video was a longer version (5:34) of the viral video (0:45).

We then ran a reverse image search of keyframes of this video, which led us to another Facebook video posted three days earlier. This was even longer than the previous one at 11: 52 minutes.

In this video, we can hear the narrators stopping the “Maulvi” from the alleged crime and then proceeding to tell the woman to be wary of such people, all in the set up of a video to create awareness. The clip has a disclaimer at the end, stating that everything in the video is imaginary, proving that it was staged.

We also found this Facebook video from a page run by Abc Prank, which features the “maulvi” in a different role in another scripted video.

While scanning the same account on Youtube, we discovered it was run by one Chandan Kumar, who also goes by the name Chandan Chaudhary. One of the videos uploaded by him features the actor again.

We reached out to Chandan Chaudhary, enquiring whether this was the same man who acted as the “maulvi”. We will update the article upon receiving a response.

Newschecker further attempted to trace the original source of the “maulvi” video but were unable to find any credible sources. We will update the article on finding more information.