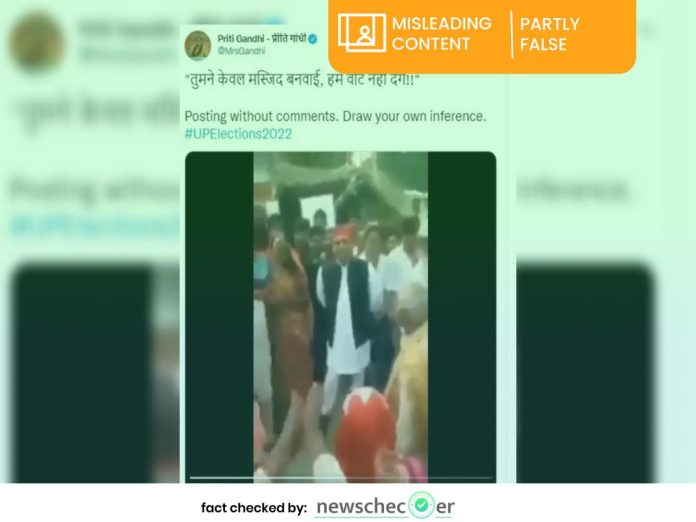 With UP polls due in less than a week, it is no surprise that social media is swamped by politically motivated misinformation. One such video doing the rounds purportedly shows a villager telling Akhilesh Yadav “You only built mosques, we will not vote for you.”  The video has been shared by BJP leader Priti Gandhi among others, and has seen over 300 shares and over 700 likes. But Newschecker has found that the claim is misleading and that the villager was actually blaming faulty EVM machines for SP’s loss in the polls.

With just days to go for the elections, the fight for UP has intensified with opinion polls showing a close fight between BJP and Samajwadi Party for forming the state government. The BJP and the opposition have been trading scathing remarks in the media with UP chief minister Yogi Adityanath taking to Twitter to say “The opposition is doing politics of appeasement, while the BJP is doing Antyodaya (rise of the last person) .” While addressing a rally in Charra, Yogi Adiyanath also said that when Samajwadi Party was in power, they only built graveyards, which is where SP must go to seek votes.

Addressing a rally in Shahjahanpur, Union Defence Minister Rajnath Singh accused the SP of doing caste politics, while SP Chief Akhilesh Yadav hit back, saying that the BJP is doing politics over religion.

Due to battle for UP being fought on social media also, a lot of fake news is being circulated.

On a keyword search on facebook we found a video uploaded by SP National Spokesperson Roli Tiwari Mishra on 12 November 2019. In the video it is clear that the villagers are seen complaining about the EVM machines being the cause of BJP winning all over the country. One of the villagers asks Akhilesh Yadav to change the EVM machines if he wants to win an election in UP. There is no mention of a mosque in this video.

Newschecker team also found a video of the incident on Youtube where the villagers were seen complaining about EVM machines.

Our investigation makes it clear that the video purportedly showing an elderly man telling Akhilesh Yadav “you only built mosques, we will not vote for you”, is Misleading. Although Newschecker could not independently confirm the original source of the video, it is not from the recent assembly election campaign and has been present since at least 2019.

Vaibhav Bhujang
Vaibhav is a part of Newschecker’s English team, where he spots and debunks all kinds of misinformation, making the rounds on the internet. A Journalism graduate from St. Xavier's College, Mumbai, he holds an M.A degree in Philosophy and an M.Phil from Delhi University.
Facebook
Twitter
WhatsApp
Linkedin
Previous article
Explained: Why Has Karnataka Shutdown Educational Institutions Over The Hijab Row?
Next article
Uttar Pradesh: How Far Did Yogi Administration Take The State On The Path Of Progress?