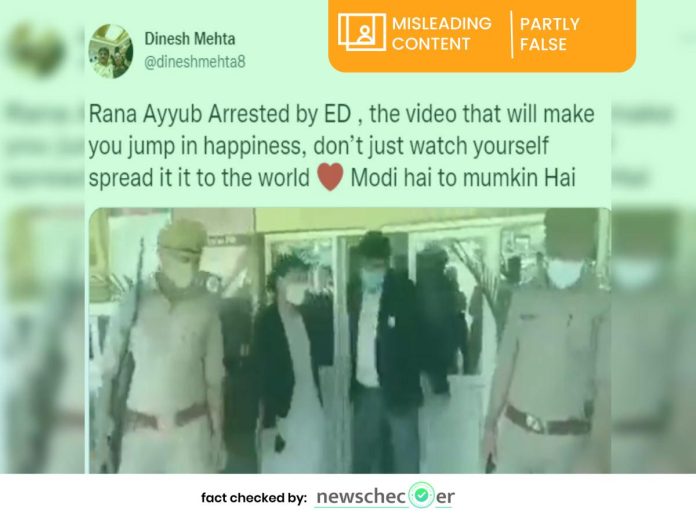 Journalist Rana Ayyub has been in the news recently after the Enforcement Directorate attached Rs 1.77 Cr of her assets for alleged money laundering. According to an article by Indian Express the ED alleged that Rana Ayyub had raised money through crowd funding sources for various causes including helping farmers and helping families of Covid affected people, funds for which were directed to her personal account along with family members. In light of these events a video has gone viral on social media with the claim ‘Rana Ayyub has been arrested for money laundering.’

The video has been shared by Twitter user JD Roy which has garnered over 36,000 views along with 950 likes and over 500 retweets along with the caption ‘Hello the @washingtonpost here’s your reporter @RanaAyyub⇢Charity Scandal.’

Newschecker also found many other posts on Twitter with similar claims one of which has around 20,000 views along with around 2,300 likes and 1000 retweets with the caption ‘Rana Ayyub, who spread rumours and hatred in the country in the name of journalism by taking foreign money, has been arrested, ED attached Rs 1.77 crore, accused of money laundering’.

In the video Rana Ayyub is seen surrounded by police officers as she walks out with her lawyers who escort her into a car.

Rana Ayyub had also been in the news recently as complaints were filed against her regarding an interview she gave to the BBC in which she commented on the ongoing Hijab Row in the country. She called the saffron shawl wearing students as terrorists who have an agenda against muslims.

To verify the authenticity of the video, Newschecker conducted a reverse image search of the key-frames of the video on Google and found a longer version on Youtube posted on the Republic World news channel’s Youtube page. The video was uploaded on 2 July, 2021.

According to the video, Rana Ayyub among others were called into questioning by the police in Ghaziabad regarding tweets they had made regarding the incident which involved an elderly man named Abdul Samad being beaten. Ayyub and several other journalists shared the video of the man being beaten on Twitter and were consequently booked for inciting communal sentiments to commit violence.

Upon performing a keyword search, Newschecker found another video report by Punjab Kesari UP on their Youtube channel uploaded on 3 July, 2021. According to the news report, Rana Ayyub had reached Loni Border police station where she recorded her statement and was questioned for over 2 hours. In the video it can be seen that it is the same video that has been circulating on social media.

According to the investigation conducted by the Newschecker team, it was found that the viral video of Rana Ayyub getting arrested for money laundering is an old clipping shared out of context.

Vaibhav Bhujang
Vaibhav is a part of Newschecker’s English team, where he spots and debunks all kinds of misinformation, making the rounds on the internet. A Journalism graduate from St. Xavier's College, Mumbai, he holds an M.A degree in Philosophy and an M.Phil from Delhi University.
Facebook
Twitter
WhatsApp
Linkedin
Previous article
Viral Video Claiming To Show ‘Muslim Youth’ Beheading ‘Hindu Girl’ In Surat Is Misleading, Incident Has No Communal Angle
Next article
Has Tiku Talsania Converted To Islam? No, Viral Claim Is False