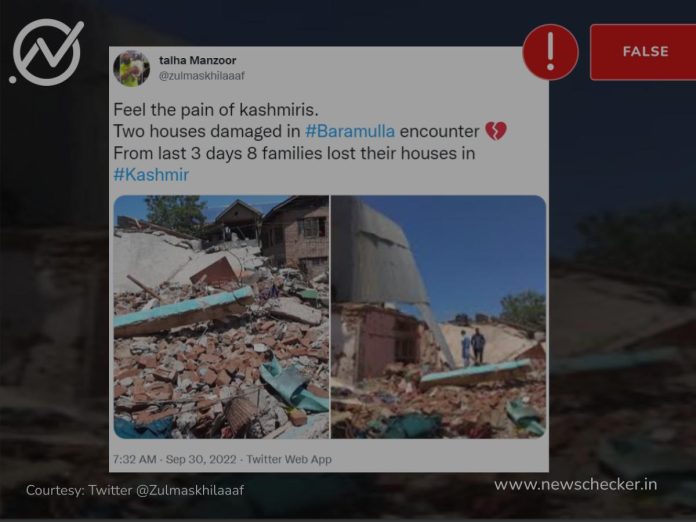 Social media handles and media outlets shared images showing a house in rubbles, claiming that it was destroyed during an encounter that took place in J&K’s Baramulla district on Friday.

The picture was carried by TV9 Kannada website with a caption “House destroyed during encounter operation in Baramulla”.

Another news website TT News also carried the same image in its report on the encounter and claiming that the house destroyed in Baramulla encounter.

Archive link to the report here

Twitter handle @zulmaskhilaaaf has also shared the same picture with the tweet claim that “Feel the pain of Kashmiris. Two houses damaged in #Baramulla encounter. From last 3 days 8 families lost their houses in #Kashmir”,

Newschecker first conducted a google reverse image search of the picture and found a report by The Print dated May, 11, 2020. The report carries the same image, with the caption “At the encounter site in Beighpora village where Riyaz Naikoo was killed”.

The photograph was captured by Azaan Javaid, a Kashmir based journalist. To verify the claim, we reached out to Azaan Javaid who clarified that the photograph was taken by him from the site in Pulwama, where Hizbul Mujahideen’s top commander Riyaz Naikoo was killed in 2020.

On further research, we also found a news report on the  killing of Riyaz Naikoo by Newsclick, which carried the same picture.

“Muhammad Sultan had made most preparations for his daughter’s marriage and had even stocked goods at his home for the walima ceremony. But all those items including wedding clothes and gold jewellery of his to-be bride daughter were destroyed as bullets and explosives pulled his house apart leaving behind a wreckage”, the report reads.

Newschecker investigation reveals that the image claiming to show a house destroyed in the recent Baramulla encounter is actually from an encounter site in Pulwama in May 2020, in which HM commander Riyaz Naikoo was killed.