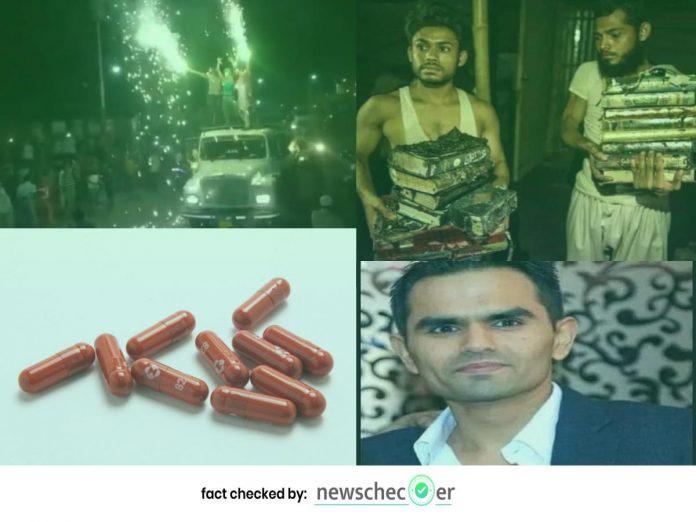 Seeing is believing, they say but the phrase does not always hold true on the internet. From videos showing celebrations of Pakistan’s victory in the T20 cricket match to irrelevant photos shared as Tripura’s amidst the riots in the state, various old photos and videos went viral online with a communal narrative. Misinformation related to a possible cure for COVID19 and the famed NCB Mumbai director Sameer Wankhede was also widely shared by Netizens this week.

Hours after Pakistan won the T20 cricket match against India on October 24, videos claiming to show celebrations in Kashmir & Muslim neighborhoods in major Indian cities went viral on social media. An investigation by Newschecker found that some of these videos have actually been resurrected from 2017 when Pakistan won the Championship Trophy by winning against India.

A video, showing young men setting off fireworks in a dark alleyway, cheering and waving Pakistan’s flags went viral on social media claiming it shows celebrations in Srinagar after Pakistan won over India in the recent T20 WC match. While several verified Twitter handles shared the claim online, a fact check by Newschecker has found the video to be from August 2020.

Amidst reports of communal violence in Tripura, several old images are circulated online claiming to depict the riots in the north-eastern state. One such image showing, two young men holding desecrated copies of the Holy Quran, is shared claiming ‘Muslims are attacked in Tripura.’ Newschecker’s investigation found that the image was from earlier this year, and was captured in Delhi shortly after a fire ravaged through a Rohingya camp.

Social media posts claiming an attack on Sameer Wankhede, the famed Narcotics Control Bureau, Mumbai director went viral online. Newschecker’s investigation found Wankhede and the NCB team were attacked last year while arresting a drug peddler and the incident was falsely shared as recent in the context of the cruise ship case.

Molnupiravir, an experimental oral medicine for COVID19 was claimed to be a repackaged ‘Ivermectin’ on social media. Newschecker’s research on the medicines found both drugs are different. While Ivermectin inhibits the nerve and muscle function of worms in the human body, Molnupiravir inhibits RNA synthesis of SARS-CoV-2.

An image claiming to show Sukmawati Sukarnoputri, the daughter of Indonesia’s first president, who recently converted to Hinduism from Islam, was widely shared on social media. Newschecker’s analysis found the image misleading as it shows the conversions of Princess of Java in 2017.