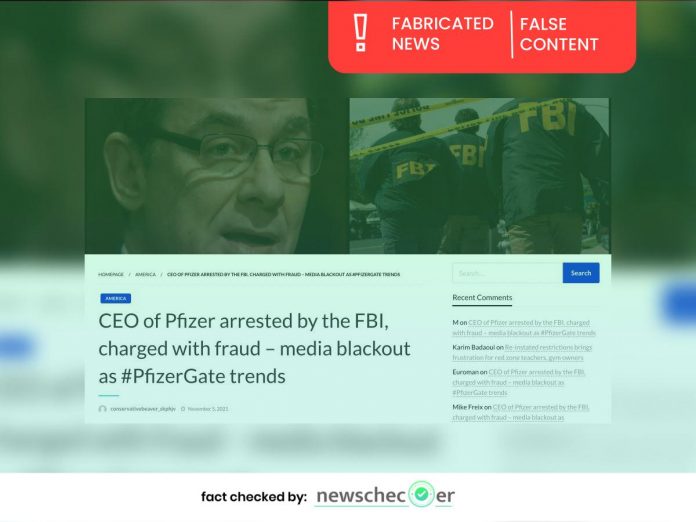 An article alleging Pfizer’s CEO Albert Bourla was arrested on 5 November 2021 has been doing the rounds on Whatsapp and Facebook in India. The article posted on www.conservativebeaver.com alleges that Pfizer’s CEO was arrested by the FBI on charges of fraud.  The claims around the alleged arrest of Pfizer’s CEO come amidst the company recently unveiling data for its experimental antiviral pill for COVID-19.

The website claims that a media blackout ordered by a US judge is the reason why this information is not being reported in the US  and adds that since the said website is based in Canada they are not subject to American law.

The article- an alleged exclusive by the website author ‘conservativebeaver_skphjv’ reads “​​Albert Bourla faces fraud charges for his role in deceiving customers on the effectiveness of the COVID-19 vaccine.”

The website describes itself as a Canadian ‘alternative’ news portal offering ‘Conservative News. Canadian Style’. The ‘About’ section of the website further says that the publication started as an ‘underground newspaper’ in Montreal, Canada and is now available online.

The website has declared that they are self-funded and have not received any grant for their work. A closer look reveals that Conservativebeaver.com hosts multiple Ads by Google along with its other article details in the ‘Latest News’ section on the right side of the page. It also hosts pop-up ads as well as dedicated advertisement space on the lower edge of the web page, offering some insights into its revenue model.

Offering details, the article written by an unidentified person claims Bourla was “awaiting bail hearing” and that federal agents were “in the process of executing a search warrant at his home and other properties”. A recent investigation on alleged lapses in Pfizer’s Covid-19 vaccine trial by the British Medical Journal has been cited as the reason for the alleged arrest.

The article goes on to quote an unnamed FBI who, according to the Conservative Beaver, said that  “Pfizer lied about the effectiveness of the vaccines, and misled customers about the serious side effects the vaccines can produce. Pfizer is accused of paying off governments and the mainstream media to stay silent”

To back the claims of misconduct on part of Pfizer CEO, the article in question refers to allegations made by Project Veritas, that ‘Pfizer uses aborted fetal cells in the COVID-19 vaccine.’ While Project Veritas calls itself a ‘non-profit journalism enterprise’, First Draft describes it as a far-right disinformation group, for its previous role in spreading misinformation related to Covid-19 Vaccines as well as accusations of election fraud in the US. In fact, both Project Veritas and its founder James O’Keefe were banned from Twitter earlier this year for violations of its policies and sharing private information without consent. James O’Keefe, the founder of Project Veritas and his associates are under investigation by the FBI regarding a diary theft concerning Joe Biden’s daughter Ashley Biden.

Most of the posts circulating on Facebook refer to the same image as their source of information (shown below). On closer look, a stamp can be seen in the middle of the image with the words  ‘Postcard.’ Social media handles of the page ‘Postcard English’ on Facebook, Twitter, Koo and Instagram can be seen on the lower edge.

The original post alleging ‘Pfizer is accused of falsifying data and paying out large bribes’  on the Facebook page of ‘Postcard English’ has received 83 reactions and has been shared further 27 times and reposted by many other pages.

All Facebook pages that reposted the said post could be seen frequently reposting content from the ‘Postcard English’. In fact, most of their content (apart from a few posts)  consisted of reposts from the page ‘Postcard English’. The posts shared on these other pages seem to mostly carry content centred around politics and religion.

The reshare of the claim that received the maximum interactions could be seen on the page @IndiaWitModi with 687 interactions-includes 158 reshares and 512 reactions, at the time of writing this article.

The said page has been called out by fact-checking organisation Alt News in the past for spreading fake news on its platform.  Mahesh Vikram Hegde- the founder of Postcard news was arrested in 2018 for spreading a fake post claiming a Jain monk had been attacked by Muslim youth. Indian Express reported that the Facebook page of Postcard News was taken down in 2018. However, it can be seen that the page has resurfaced on the platform.

INDIAN CONTEXT TO THE CLAIM

The WHO recently approved India made Bharat Biotech’s COVAXIN which was one of the earliest available vaccines in the country against Covid-19. While statements by Pfizer’s CEO in August 2021 hinted at possibilities of the shot being approved in India soon, the vaccine has not yet received approval in the country.

These factors could have paved the way for the said claims to find their way into Indian social media circles.

In 2020, conservativebeaver.com had made a similar claim alleging that former USA president Barack Obama had been arrested for espionage. International news agency Reuters,  and American news magazine Newsweek, had found the claim to be false. The said article was removed by ‘conservativebeaver.com’, but an archived version of the same by Reuters can be found here.

While conservativebeaver.com describes itself as a Canadian ‘alternative’ news portal, an assessment of other articles published indicate what can be termed as misinformed narratives on other issues as well like American Rapper Travis Scott being arrested and accused of the murder of his fans in a Satanic sacrifice ritual.

Further, no news of Pfizer CEO Albert Bourla being arrested has been reported by any news outlet in the United States or in India. A quick Google search of the phrase “Pfizer CEO arrested” led us to various fact-checks refuting the claims made by conservativebeaver.com

The articles by Forbes and American fact-checking website Snopes refuting these claims also support the false nature of the article in question.

While conservativebeaver.com  also alleges a ‘media blackout’ in America about reporting of the alleged arrest of the Pfizer CEO, Newschecker did not come across any information regarding such a media blackout from any source other than the said website, which indicates the false nature of these claims.

It is pertinent to note that the website also does not carry any genuine names or images of the people who author the articles they publish. Raising questions regarding their credibility, qualifications and motivation for publishing the work that they do. As sources are not named, there is no way of following up to reconfirm quotes on which the stories are based.

Newschecker has reached out to conservativebeaver.com for a comment on their sources for these claims. The article will be updated on receiving their response.

The claim made by the website of the Pfizer CEO being arrested is False.

Forbes: forbes.com/sites/brucelee/2021/11/06/was-pfizer-ceo-albert-bourla-really-arrested-heres-how-unfounded–claims-emerged/?sh=39295b6b1702(opens in a new tab)

Reuters: reuters.com/article/uk-factcheck-obama-not-arrested-idUSKBN28A2TU(opens in a new tab)

Newsweek: newsweek.com/qanon-obama-arrested-china-espionage-1551751(opens in a new tab)

Preeksha Malhotra
Preeksha is a journalism graduate interested in exploring and working on the phenomenon of fake news globally. She desires to work on compelling stories that employ digital journalism to bring forth narratives that matter. She is also a budding researcher, studying the COVID-19 infodemic as a research fellow with the Institute of Economic Growth.
Facebook
Twitter
WhatsApp
Linkedin
Previous article
Viral Video Of Worms Being Pulled Out Of Bananas Is Misleading
Next article
Viral Pro-BJP Forward Attributed To Mark Tully Is Fabricated

Video Of Agitated Birds Flying Haphazardly Is Not From Turkey, But From Houston