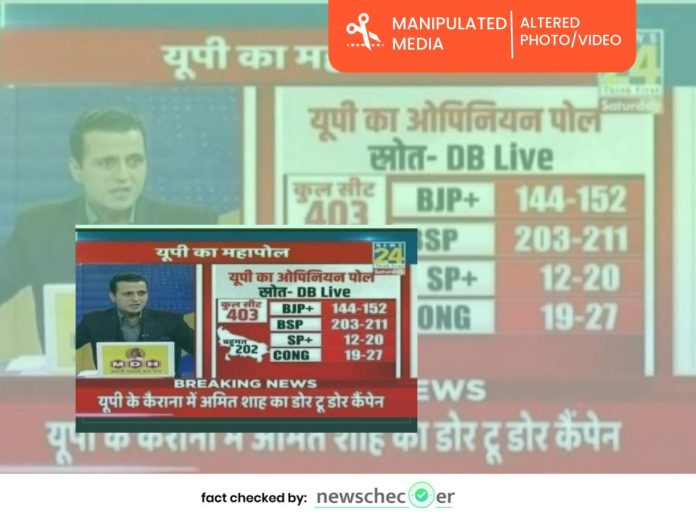 With the third phase of 2022 UP assembly elections due this week, a graphic of an opinion poll showing a massive edge to Mayawati’s BSP is going viral on social media platforms. Several users have shared an image claiming to show an opinion poll by ‘DB Live’ on news channel ‘News24’ that has predicted over 200 seats for the BSP in the UP polls. However, Newschecker has found that the viral graphic is morphed.

The viral graphic claims that the BD Live opinion poll has predicted 203-211 seats for the BSP in UP, followed by the BJP with 144-152 assembly seats. Several Facebook users have shared the viral graphic.

Links to Facebook posts can be found here, here, here and here.

While the ‘Cycle’ and ‘Lotus’ are being projected as the strongest contenders by most of the opinion polls, the ‘elephant’ has not been able to make much noise, so far. However, Mayawati is certain of a massive majority for BSP, claiming, “We are fighting to form a majority government like in 2007 to get rid of the casteist, narrow-minded, arrogant and dictatorial rule of the BJP. You will have to support BSP, the only party that cares for all sections of the society, to ensure this.”

Ahead of the election season, Newschecker debunked several political misinformation. You can check our elections related fact checks here.

To verify the authenticity of the viral graphic, we conducted a keyword search for ‘News24 2022 UP Election Opinion Poll’ on Google and found a video uploaded on the official YouTube channel of News24 on January 22, 2022 with the title ‘ Rashtra Ki Baat: अबकी बार किसकी सरकार? UP का महापोल Opinion Poll | Manak Gupta | UP Election 2022’

Newschecker carefully analysed the video and at the counters of 2:51 minutes, we found a DB Live’s opinion poll for UP elections. On comparing the video’s frame with the viral graphic, we found that they are exact replicas of each other, except for one difference. In the video, the DB opinion poll predicts 203-211 seats for the SP while 12-20 seats for the BSP, however these digits have been interchanged in the viral graphic giving a massive edge to Mayawati’s party. We found the same video was shared News24 official Twitter handle.

Continuing the investigation, we looked up ‘DB live UP opinion poll 2022’ on Google and found a report by ABP Live, dated January 20, 2022. According to the report, the DB live opinion polls predicted 203-211 seats for the SP while 12-27 for the BSP, same as the News24 video report.

We searched  ‘DB Live Opinion Poll 2022’ on YouTube and found several videos uploaded on the official channel of DB Live. In a video uploaded on December 26, 2021, DB Live predicted 203-211 seats for the SP while 12-27 for the BSP as seen in reports by News24 and ABP Live.

We went through various opinion polls by DB live and found that the seat prediction for the SP remained over 200 and for BSP around 20 in all their surveys for the 2022 UP Assembly elections. You can check their opinion polls here, here and here.

The viral graphic claiming to show an opinion poll by DB Live projecting a massive edge to the BSP in upcoming UP polls has been morphed.

Vasudha Beri
Vasudha noticed the growing problem of mis/disinformation online after studying New Media at ACJ in Chennai and became interested in separating facts from fiction. She is interested in learning how global issues affect individuals on a micro level. Before joining Newschecker’s English team, she was working with Latestly.
Facebook
Twitter
WhatsApp
Linkedin
Previous article
Slowdown in Economic Growth To Unemployment: A Look At All That’s Ailing Punjab
Next article
Weekly Wrap: False Claims Around Hijab Row, Misleading Report On Google Reward And More