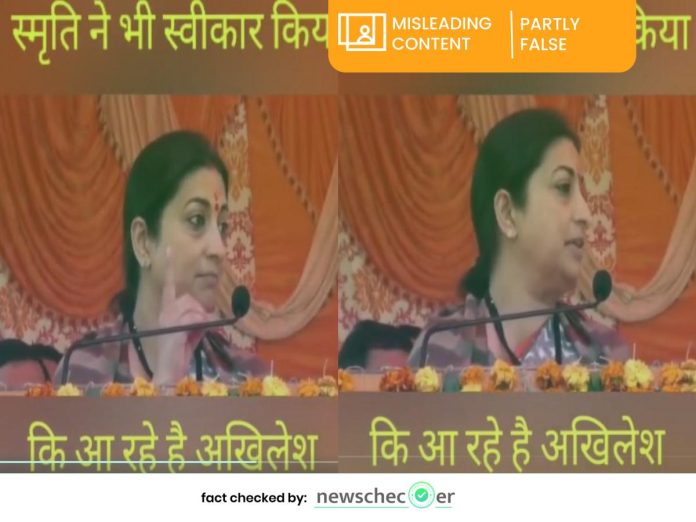 Uttar Pradesh has turned into a political battlefield with the assembly elections. While the incumbent BJP is confident that Yogi Adityanath will occupy the Chief Minister’s seat for the next five years as well, the SP is being projected as a big threat to the saffron party. Several senior political leaders conducted public meetings and rallies in the state ahead of the polls. Union Minister and BJP leader Smriti Irani recently held a public meeting in Baghpat in support of BJP candidate Sahendra Singh. Soon after, social media users shared a video claiming that Smriti Irani has “accepted that Akhilesh Yadav will come to power.”

In the viral video Irani can be heard saying, “if people vote for the RLD, then the Lal Toppi Wale will form the government” in Hindi. The phrase ‘Lal Toppi Wale’ is used as a reference for the SP. However, Newschecker has found that the viral clip of 24 seconds is misleading.

Several social media users have shared the video of Smriti Irani claiming that the union minister has accepted that SP will form government in UP.

Akhilesh Yadav-led SP has emerged as the biggest rival for the BJP in Uttar Pradesh. According to the ABP News-CVoter Opinion Poll, the BJP+ is likely to win 225- 237 seats, the SP+ 139-151 seats. The BSP will secure 13-21 seats while Congress is likely to win 04-08 seats in the UP assembly elections. According to the Times Now-Veto Opinion Poll, BJP and its alliance are expected to win around 212-231 seats, the SP to win in 147-158 constituencies, BSP may manage 10-16, Congress 9-15 and others 2-5 seats.

Social media platforms are seen as ideal spaces for bad actors to spread misinformation for political gains. Over the past one month Newschecker had debunked several false and misleading claims regarding elections. You can read our fact checks here.

To verify the authenticity of the video wherein Smriti Irani is heard saying that Akhilesh Yadav will come to power, we conducted a Google reverse image search of the key frames of the video along with keywords ‘Smriti Irani Lal Toppi Wale’ and found a report by Asianet Hindi, dated February 6, 2022.

According to the report, Irani attended a public meeting organised as a part of a promotional campaign for Sahendra Singh, BJP candidate from Chaproli in Bhagpat. The report added that the Union Minister launched an attack on the SP while addressing the public.

According to the report, Smriti Irani said that you must be thinking, candidate is carrying a hand pump (referring to the RLD), but I am talking about cycle (referring to the SP), but if people vote or support the RLD then ‘Lal Toppi Wale’ will form the government. The women have said that they won’t let the SP-RLD coalition form the government. I am here to listen to what the men have to say.

The report also carried a video of Smriti Irani addressing the public. At 33 seconds in the video, we found the viral clip being shared with the claim that Irani has accepted that Akhilesh Yadav will form government in UP. However, she goes on to say, “women are saying they won’t let that happen. I am here to listen to what the men have to say.”

In the video, she can also be heard saying, “When Samajwadi Party leaders were asked as to why they opened fire on innocent ‘Ram Bhakt’, the SP leaders had said that if they had to kill, they would have killed more. I am not here only to seek votes for Sahendra Singh ji but for every ‘Ram Bhakt’ who was killed by the SP.”

The viral clip claiming that Smriti Irani accepted that Akhilesh Yadav will form government is misleading. It is a clip for a video of Irani’s public address at Bhagpat and in the extended version of the video, she can be heard saying that women won’t allow the SP-RLD coalition to form the government.

Vasudha Beri
Vasudha noticed the growing problem of mis/disinformation online after studying New Media at ACJ in Chennai and became interested in separating facts from fiction. She is interested in learning how global issues affect individuals on a micro level. Before joining Newschecker’s English team, she was working with Latestly.
Facebook
Twitter
WhatsApp
Linkedin
Previous article
Video Of ‘Most Honest Candidate’ From 2017 Resurfaces Ahead Of 2022 UP Elections
Next article
Viral Video Of Mayawati Asking Voters To Vote For BJP Instead Of SP Is An Old Video