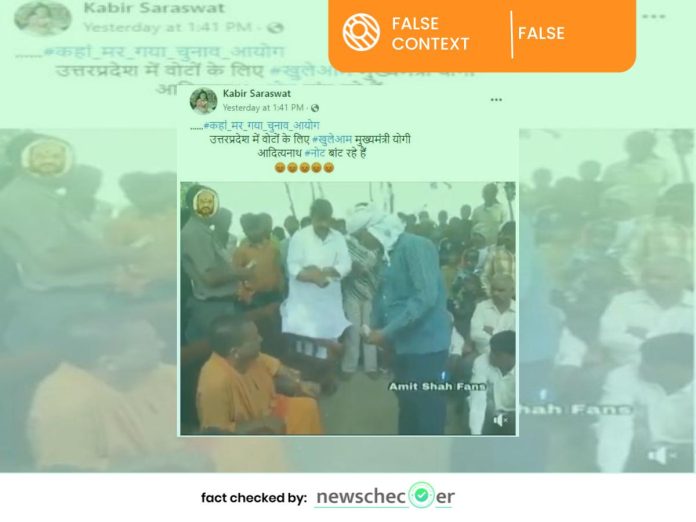 The first phase of Uttar Pradesh assembly elections concluded on Thursday. With six more phases due over coming weeks, the political war-of-words amongst different political parties has reached a shrill pitch. Social media platforms have also emerged as a highly viable medium for politicians to reach the public. However, this also means misuse. It is in this backdrop, an old video of Yogi Adityanath is going viral claiming to show that the incumbent UP CM distributed ‘cash for votes’ ahead of the polls.

In the 1:24-minute video, Yogi Adityanath can be seen sitting surrounded by a group of men. One of his aides is heard calling out names while the other can be seen handing over cash to people. The video is being widely shared on WhatsApp circles.

Newschecker also received the video on our WhatsApp tipline  (+91-9999499044) requesting to be fact checked.

The video was also posted on an Instagram page ‘Troll bhakts’ and was able to garner over 9,000 views in just 2 hours.

Adityanath, who is eyeing a second term as UP CM, recently drew flak from opposition after his remarks about UP becoming Kashmir, Bengal or Kerala went viral. Ahead of the first phase of assembly elections in the state, Adityanath said in a video message, “Be careful. If you err, water will be poured over the hard work of the last five years. And this time, U.P. will not take much time to become Kashmir, Bengal or Kerala.”

Newschecker conducted a search of the keyframes of the video with the help of Google reverse image search and found several Facebook posts from 2019, proving that the video has been in circulation for the past 3 years.

We further conducted a reverse image search on Yandex and found a YouTube video, dated March 23, 2019, uploaded by a channel called ‘math with Rajat.’

On carefully analysing the video, we were able to hear some conversation between the person calling out the names and one ‘Fuggalal.’  The person asked ‘Fuggala’, “Did you sow at two places?” in Bhojpuri to which ‘Fuggalal’ replied, “Had sown at two places in one.”

We deduced that the conversation was related to agriculture and not elections.

In 2019, when the video first went viral ahead of the General elections, Newschecker team was able to find the source of the video and contact one Vinay Kumar Gautam, who had uploaded the now-deleted video on YouTube in 2012. Gautam had said, “In 2012, crops were destroyed because of fire in many districts of Purvanchal. Following which, the then MP of Gorakhpur Yogi Adityanath had offered some financial assistance to families whose crops were destroyed in fire. The video captures the same and was uploaded on YouTube in 2012.”

However, the original video has been taken down from YouTube.

The viral video claiming to show Yogi Adityanath and his aides distributing money to entice voters ahead of the 2022 UP Assembly Elections is untrue. The video is from 2012 and shows Adityanath providing financial assistance to people whose crops were destroyed because of fire.

Vasudha Beri
Vasudha noticed the growing problem of mis/disinformation online after studying New Media at ACJ in Chennai and became interested in separating facts from fiction. She is interested in learning how global issues affect individuals on a micro level. Before joining Newschecker’s English team, she was working with Latestly.
Facebook
Twitter
WhatsApp
Linkedin
Previous article
Viral Claim That Coconut Water Can Be Used As A Substitute For IV Bag Is Misleading
Next article
Viral Video Of Water Being Thrown On Women Wearing Hijab Is An Old Video From Sri Lanka