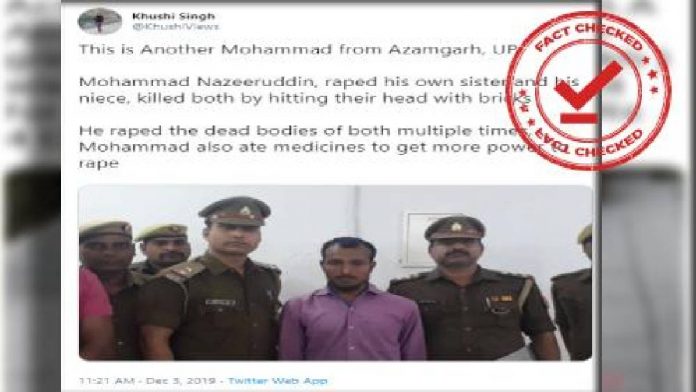 UP resident Mohammad Nazeeruddin raped his own sister and niece and then killed them both by smothering their heads with bricks. He also raped their dead bodies multiple times and consumed medicines to increase his stamina.

This is Another Mohammad from Azamgarh, UP

Mohammad Nazeeruddin, raped his own sister and his niece, killed both by hitting their head with bricks

He raped the dead bodies of both multiple times, Mohammad also ate medicines to get more power to rape pic.twitter.com/BLBfcbcXa3

A Twitter user who goes with the handle Khushi Singh has shared a claim which states that a person named Mohammad had raped and killed his own sister and niece. The claim further states that the accused raped the dead bodies of his relatives.

This is Another Mohammad from Azamgarh, UP

Mohammad Nazeeruddin, raped his own sister and his niece, killed both by hitting their head with bricks

He raped the dead bodies of both multiple times, Mohammad also ate medicines to get more power to rape pic.twitter.com/BLBfcbcXa3

Post brutal rape and barbaric murder of a veterinary doctor in Hyderabad, many such claims are doing rounds on social media. Some of the claims on social media are backed with authentic sources while some others are being shared merely because there are strong rumors around the said incident.

We proceeded to fact check the claim in the aforementioned tweet. Firstly, we performed a reverse image search but couldn’t find anything to corroborate.

Then, we performed a Google search with the same keyword as mentioned in the claim. This led to a story published in the Times Of India.

Nasiruddin in police custody VARANASI/LUCKNOW: A week after a couple and their infant son were found murdered and two children seriously injured at their Ibrahimpur residence in Mubarakpur area of Azamgarh, police on Monday arrested a 38-year-old man.

As per TOI story, the shocking incident took place in Azamgarh where a 28-year-old raped and sodomised a 30-year-old woman and her nine-year-old daughter after injuring them grievously with a blunt object inside their home on the night of November 24. The TOI report also states that the accused and the victims were a resident of the same area.

As UP Police is actively present on social media, we also checked their Social Media handle for the verification of the TOI story. After performing a Twitter advanced search, we found a series of tweets by Azamgarh Police which talk about the said incident.

In one of the tweets by Azamgarh Police, the link of the brief statement by SP Azamgarh is also given.

Police says, “Victim and Accused are not relatives”

After reading the TOI story and the tweets by Azamgarh Police, it was evident that the accused and the victims were not relatives but residents of the same area. As we have seen in our past few articles, media outlets often fall prey to poor reporting or sometimes even misreporting. Keeping this in mind, we further decided to speak to the Azamgarh Superintendent of Police.

The Azamgarh SP, while speaking to us, confirmed the incident and other details published in the TOI story. Notably, when asked about the relationship between the victim and the accused, he said, “There is no relationship between the accused and the victim, except for the fact that they lived in the same area.” “Any reports of the two being related by any other means is false,” he added.

Claim turned out to be ‘Misleading’

The claim of the accused being a relative of the victim in this heinous crime turned out to be ‘False’ in our investigation.

Facebook
Twitter
WhatsApp
Linkedin
Previous articleHow To Get A FASTag For Your Car?
Next articleCongress, Media Outlets share Image of US Navy Combat ship to commemorate Indian Navy Day