Delhi will be voting tomorrow for its assembly election. While campaigning for the election is over social media is buzzing with surveys, opinion polls, and several videos. One such survey, predicting a huge victory of the Bharatiya Janata Party (BJP) in Rajendra Nagar in the upcoming Delhi Assembly elections is going viral on social media. The poll has been attributed to the media house ABP News. In this survey, BJP is securing 72% of the votes. We found that several Twitter users have shared the same viral image. 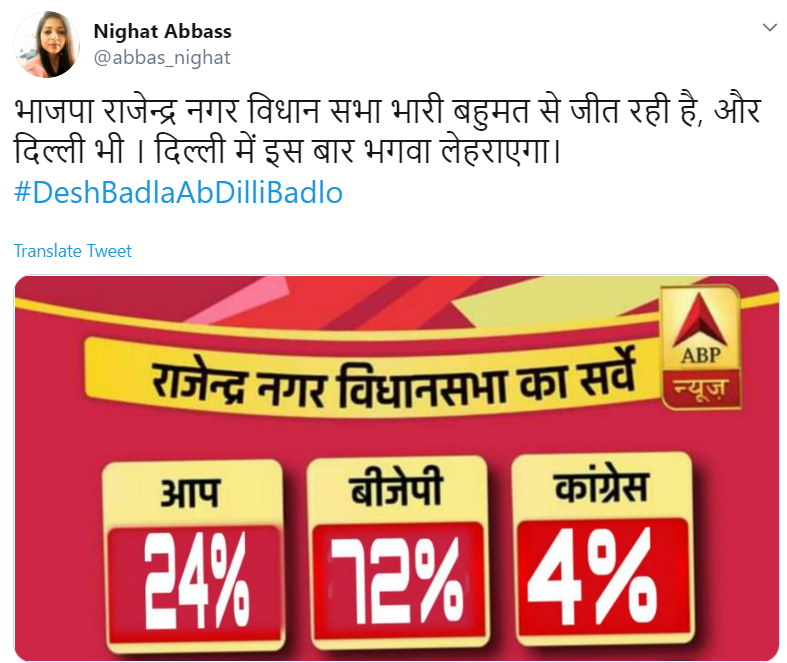 As we began our fact-check, we looked for this survey on the ABP News website and on their official YouTube channel. We found that ABP News did conduct an opinion poll on Wednesday but according to ABP News report, “The conducted C-voter survey was based on data collected between January 26 to February 4, 2020, in which ABP News spoke to a total of 11,188 people in Delhi and asked their opinions. As per the survey, AAP is likely to get 45.6% vote share, BJP stands on 37.1% and Congress with 4.4%”

ABP News conducted Delhi elections final opinion poll on Wednesday. The C-voter survey was based on data collected in between January 26 to February 4, 2020. ABP News talked to a total of 11,188 people in Delhi and asked their opinions.

When we examined the viral image closely, we found that the image has several discrepancies. For example, the font used in the poster is generally not used by the aforementioned media outlet. We also observed that the templates containing the claimed opinion poll results are tempered as the color ‘red’ seems to be used for hiding the original results.