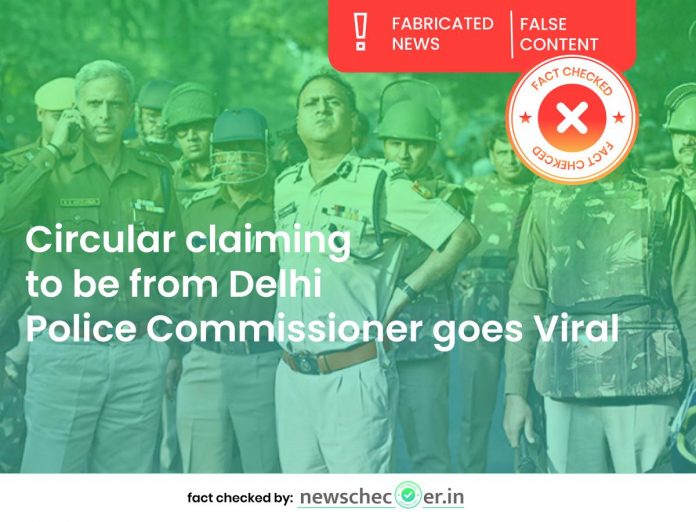 Even as the whole country has put up a united fight against the novel coronavirus outbreak, rumor mongering messages and graphics have been flooding social media. A circular claiming to be from Commissioner of Police, Delhi is doing rounds on various platforms. The text of the message reads,” Exercising the powers under section 35 of the Delhi Police Act, 1978 , the following directions are hereby issued for the purpose of prevention and control of the outbreak of pandemic disease namely COVID-19 in the national capital territory of Delhi”. The claim was also sent by several readers to Newschecker’s WhatsApp  helpline number for verification. With the help of relevant keywords, we also looked for media reports but did not find any authentic information to corroborate.Also,we found that there were no authentic signatures on the viral circular.

To verify the viral claim, we reached out to the Additional Public Relation Officer, Anil Mittal, who rubbished the viral circular message. He said, “It is merely a fake circular which has gone viral on social media .No such circular has been issued by the Commissioner of Police, Delhi”.

Shaminder Singh
Shaminder started off his career as a freelance journalist for a consulting and research firm. He has been a Political Strategist and Media Manager. Before joining Newschecker, he worked with various reputed media agencies like Daily Post India, PTC News.
Facebook
Twitter
WhatsApp
Linkedin
Previous articleDr. Devi Shetty Did Not Advise Against Coronavirus Testing, Fake Audio Clip Goes Viral
Next articleCristiano Ronaldo transformed his Hotels into Hospitals to help Coronavirus Patients?