Many Social Media users are sharing a four minute length video on their handle which claims that , “Respected Atal Bihari Vajpayee ji’s niece finally broke her silence”. In the viral video , the woman can be seen giving interview to a channel.

We found that several users on social media including Twitter and Facebook shared the same viral video.

In the video, a woman can be heard criticising the Narendra Modi led BJP government on various issues including economy, secularism at an anti-Citizenship Amendment Act rally.

Meanwhile, during our search we also found the same post on Naziya Alvi Rahman’s facebook wall which claimed that the girl in the viral video is her sister. Naziya Alvi Rahman wrote on her facebook post that ,“This is exactly how fake news spreads. Read the caption below. I so badly wish it was true but it isn’t. She is my humble sister Atiya Alvi Siddiqui” 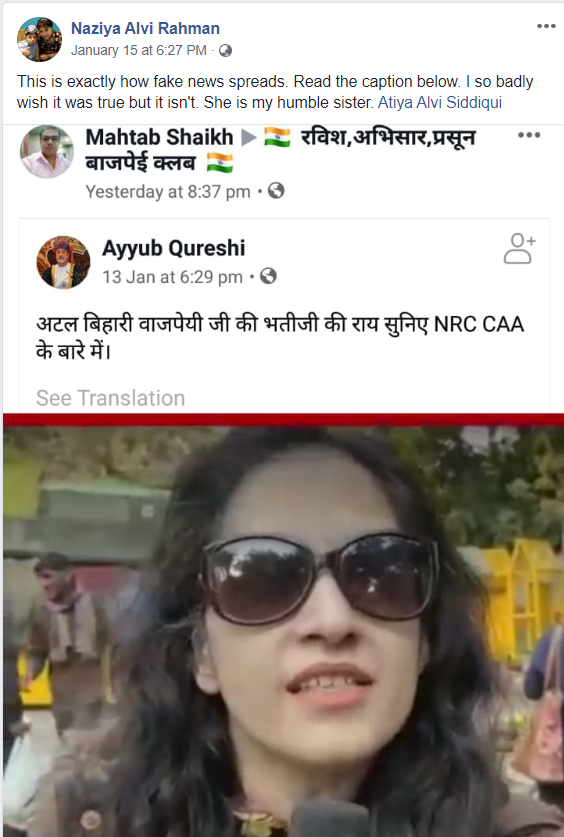 Who is Atal Bihari Vajpayee’s niece?

She resigned from the BJP on 25 October 2013 citing that the party was allegedly under the grip of power politics. Ending her 32 year long association with BJP , she joined Indian National Congress and contested 2014 Loksabha election from Bilaspur constituency in Chhattisgarh. However, she was defeated by BJP’s Lakhan Lal Sahu with a margin of 176,436 votes. Karuna Shukla contested in 2018 Chhattisgarh Vidhan sabha election from Rajnandgaon, but lost. She was defeated by former Chief Minister Raman Singh.

The BJP was taken by surprise when the Congress decided to field former Prime Minister Atal Bihari Vajpayee’s niece Karuna Shukla against Chhattisgarh Chief Minister Raman Singh from the Rajnandgaon constituency in the assembly election. For the Congress, it wasn’t just about fielding a strong candidate from the seat and giving the chief minister some sleepless nights.

Newschecker’s team fact-checked the claim and found that the video viral on the Social Media showing Atal Bihari Vajpayee niece criticising the government on Citizenship Amendment Act (CAA) is false.