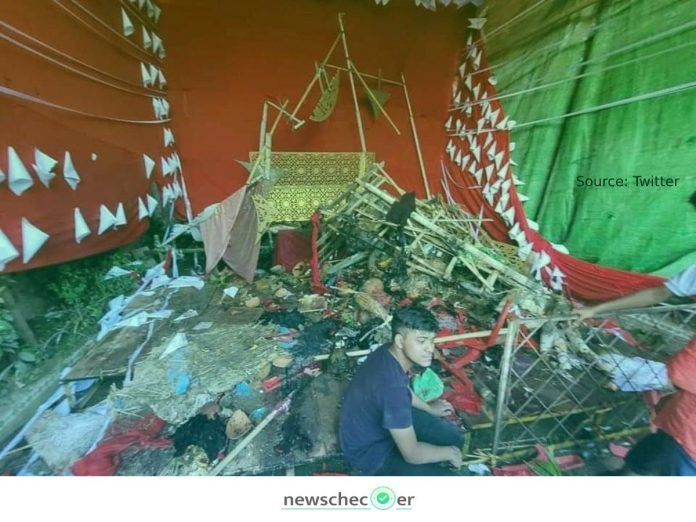 New Delhi: One week and 6 deaths later, the violent communal clashes in Bangladesh, that saw attacks on several Durga puja pandals and Hindu homes, seem to have finally eased. 35-year-old Iqbal Hossain, the man who allegedly triggered it all by placing a copy of the Holy Quran in the Durga puja pandal in Cumila has been arrested after being identified through CCTV footage. Some reports alluded to his history of drug abuse, hinting that he may have been coerced to commit the act. But the communal violence targeting Hindus in the neighbouring country reverberated among Indian social media users, with #SaveBangaldeshiHindus becoming one of the top trends for days together.

Several social media pages tweeted out videos and images, claiming to show attacks on Hindus in Bangladesh. These were not only shared on social media by several verified handles, including pro-right wing social media voices, but also cited as credible sources of information by the prominent news outlets in the country.

@UnityCouncilBD was one such page. It carried a verified badge or the ‘blue tick’, lending it authenticity and was also followed by senior leaders who supported the BJP. The page describes itself as the official twitter page of the Bangladesh Hindu Buddhist Christian Unity Council. On closer inspection, we found that not only did the page share posts with sharp and provocative captions, but also shared content that was misleading. Several Indian news portals like Scroll.in, Times Now, India Today, ThePrint and OpIndia also cited the tweets put out by the twitter page.

The page was found to be impersonating the Bangladesh Hindu Buddhist Christian Unity Council and was later taken down after the Newschecker report. But the damage had been done. The page’s followers went up dramatically in the days following the violence.

The page also shared content falsely claiming the visuals to be from the communal attack in Bangladesh. For instance, the page posted a video showing a wooden structure with Durga idols inside burning that was widely shared, including by Anand Ranganathan, Consulting Editor & Columnist with Swarajya magazine.

The tweet claimed that it was from violence hit Rangpur, where at least 60 Hindu homes were targeted by angry Islamist mobs, burning down at least 20 of them. An investigation by Newschecker has revealed that the video was actually from Tripura. Newschecker contacted Jyotish Ranjan Das, Divisional Fire Officer of Dhalai Division in Tripura, who confirmed that the video was from Tripura. “The report is false. It is a fire in a Durga Puja pandal in Tripura’s Dhalai district and not from Bangladesh as is being claimed,” he said.

Similar claims were made by several obscure pages with questionable credibility, possibly to keep the momentum of online outrage going in India even as violence began fizzling on the ground. A video claiming to be a Hindu home targeted by Islamists in Panchagarh district of Bangladesh is a case in point. An investigation by Newschecker revealed that the incident, though from Bangladesh, was an accident. Speaking to Newschecker, Rajib Bhuiyan, from the Debiganj fire station that responded to the fire alert, said “It was not a case of arson. The homeowner used to ripen bananas by creating smoke. He used to do this inside the house. That caused the fire, which burned down the house.”

Another video of a brutal killing that took place in Dhaka earlier this year was shared as the video showing the brutal killing of Jatin Saha- one of the three people who died in the violent attack on the ISKCON temple in Noakhali. A reverse image search of the key frames of the video showed that the video shows the brutal murder of a businessman named Sahinuddin in Dahaka’s Pallabi area over a land dispute.

Read: Video From May 2021 Wrongly Linked To Bangladesh ISKCON Violence

A photo of a woman in tears, in front of the charred remains of a house went viral on social media similarly, claiming it to be from the recent attacks. Newschecker’s investigation found the image was from 2017 and was falsely linked to the violence. According to reports, the video shows the aftermath of a communal clash that took place in November 2017, when a man named Titu Chandra Roy from Rangpur, shared a post that hurt Muslim sentiments, triggering attacks on several Hindu homes.

Read: 2017 Image Of Woman In Tears Shared As Victim Of Recent Communal Attacks In Bangladesh

What sets apart the recent violence that took place against the Hindus in Bangladesh is how willing many twitter users were to share such posts and claims without due diligence. Pro-right commentator and former president of Oxford Students Union, Rashmi Samant is among those who shared a claim that over 500 Hindu homes were set on fire in Bangladesh’s Rangpur during the violence. The now deleted post had seen 1,500 shares and over 3000 likes in 2 hours. Here’s an archived copy of the tweet.

When requested for the source of this claim, Samant directed us to yet another unverified page called ‘Hindusamata’. A quick look at the page shows that it shares content predominantly catering to overseas Indians, centered around the US and the UK.

Authorities in Bangladesh confirmed to Newschecker that the total number of homes that were burned in Rangpur during the violence was 29. Lima Khanom, Duty officer at the Fire Service and Civil Defence control room says “We received reports of 29 house, 2 kitchen, 2 barnhouse, and 20 haystacks being set on fire in Rangpur.” Reports by Bangladeshi news outlet Daily Star also showed that a total of 101 Hindu religious sites including mandaps and temples, 181 shops/homes were attacked in the 6 days since the Cumila incident.

There were also viral posts regarding the alleged rape of a 10-year-old in Chandpur and every other woman in her family including her mother, aunt and grandmother. Filmmaker and pro-right wing voice on twitter, Ashoke Pandit was among those who shared a news article with the same claim on his profile.

But reports by Rumour Scanner and Fact Watch, independent fact checkers based in Bangladesh, counters this claim.

The anti-Hindu violence in Bangladesh is an example of how obscure handles can put out unverified information which gets shared and amplified to a larger audience due to sheer lack of verification. While the Bangladesh government has vowed to crack down on those behind the attacks, it is unclear if this was an orchestrated attempt to unleash more harm on an already chaotic situation or impromptu development of events. But the fact remains, that social media has played a key role in the communal violence that has once again reopened the wounds of minority Hindus in the country, right from viral Tik Tok posts that triggered the attack on puja pandal in Cumila, to pages attempting to foster hate by sharing false and misleading information.

Pankaj Menon
Pankaj Menon is a fact-checker based out of Delhi who enjoys ‘digital sleuthing’ and calling out misinformation. He has completed his MA in International Relations from Madras University and has worked with organisations like NDTV, Times Now and Deccan Chronicle online in the past.
Facebook
Twitter
WhatsApp
Linkedin
Previous article‘India 1st Country to Cross 1 Billion Vaccinations’ Claims Power Minister, Deletes Tweet Later
Next articleDid Alia Bhatt Endorse Priyanka Gandhi’s Poll Promise? No, Widely Shared Video Is Manipulated