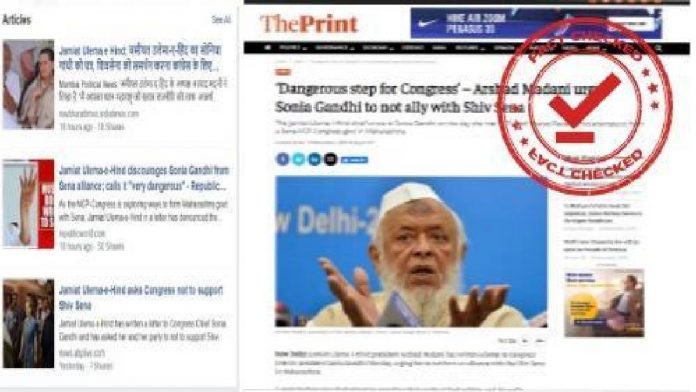 Jamiat Ulama-I-Hind wrote a letter to Congress President Sonia Gandhi asking her not to support the Shiv Sena for the formation of a Government in Maharashtra. A claim is going viral on social media which states that the Jamiat Ulama-I-Hind president Arshad Madani has written a letter to Sonia Gandhi and called her decision to support Shiv Sena ‘very unfortunate’. The letter reads

I hope you will be in good health & spirit. I want to draw your kind attention regarding Maharashtra’s bad politics, and it’s really unfortunate that you are considering to support Shiv Sena. It will be a very dangerous and harmful step for Congress Party.

I hope you take my suggestion in a very good spirit.

Many media outlets reported the letter allegedly written by Arshad Madani. The Print, TV9 Bharatvarsh, Jansatta, News Nation, Maharashtra Times and many others reported the one-way communication. However, The Print has deleted the article, an archived version of the same can be read here.

The archived version of the article published in TV9 Bharatvarsh article can be read here.

Who Is Arshad Madani?

Arshad Madani is the President of Jamiat Ulama-I-Hind which is a 1919 established organization of Islamic scholars belonging to the Deobandi school of thought in India. To get more details about the organizations are office-bearers, refer to their official website.

If you see the letter, you can easily figure out the poor alignment i.e there is a space before full stop (.), even sentences are not properly aligned. However, it is not necessary that all poorly aligned letters are fake but in official communication, recognized bodies are less likely to commit such grammatical mistakes. Email Id Mentioned In The Letter Differs From The Official Id Jamiat Ulma-I-Hind Denies The Issuance of Any Letter

Immediately after reading the reports in several media outlets we called Jamiat Ulama-I-Hind President Arshad Madani twice but he didn’t pick up.  Then we called his Personal Assistant Fazal Arshad Madani. Fazal informed us that the said letter is ‘Fake’ and no such letter is issued by Jamiat Ulama-I-Hind. “We informed ANI and other media agencies as soon as the letter came to our notice but unfortunately it has not been reported yet and the misinformation is still doing the rounds on social media,” he added.

The Letter Turned Out To Be ‘Fake’

In yet another incident, media falsely reports a letter to Congress President Sonia Gandhi written by Jamiat Ulama-I-Hind president Arshad Madani which turned out to be ‘Fake’ in our investigation.

Facebook
Twitter
WhatsApp
Linkedin
Previous articleNo, You Will Not Get A Challan For Driving In A Half Sleeves Shirt/T-shirt
Next articleThe Unnao Police Brutality Went Viral Last Week, See The Reality Behind This Video