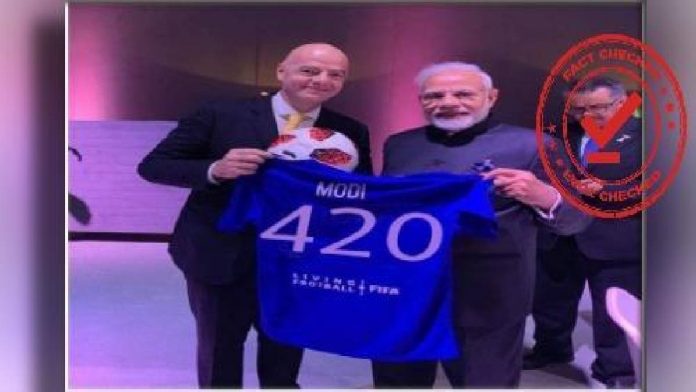 PM Modi inaugurated the FIFA World Cup jersey with the number 420 on it and he is indeed a 420( Fraud). @FIFAcom President Gianni Infantino. I thank him for the kind gesture.”

Impossible to come to Argentina and not think about football. Argentinian players are tremendously popular in India.

Today, received this jersey from @FIFAcom President Gianni Infantino. I thank him for the kind gesture. pic.twitter.com/6IszG7fyFC

The tweet by the Prime Minister clarifies the context of the picture. Per se, PM Modi went to Argentina to attend the 13th G20 Summit and there he met FIFA President Gianni Infantino. Infantino gifted a jersey to PM Modi. So the first claim in the viral WhatsApp forward turned out to be ‘False’ as this image wasn’t clicked during the inauguration of the FIFA World Cup.

BUENOS AIRES: Prime Minister Narendra Modi met FIFA President Gianni Infantino, who gifted him a football jersey with his name on its back. Modi, who met Infantino on the sidelines of the G-20 Summit here on Saturday, shared a picture of the blue jersey, with his name on the back, on Twitter. WhatsApp forward is a Photoshopped image

As it is evident in our comparison above, the image in the WhatsApp forward is photoshopped. ‘G’ is very cleverly replaced with ‘4’ hence making the combination ‘420’. Also, if you observe closely the two images are lookalikes except for the number/combination on the jersey doesn’t match.

Now, one can ask why it is not preferred to have a ‘420’ on the back of a jersey. 420 is a section in Indian Penal Code which talks about the offence which is committed by the person who cheats another person and thereby induces the deceived to deliver any property. This provision provides punishment for the same. This is the reason being behind photoshopping the ‘G’ in the actual image to ‘4’ in the WhatsApp forward.

Section 420 in The Indian Penal Code

420. Cheating and dishonestly inducing delivery of property.-Whoever cheats and thereby dishonestly induces the person de­ceived to deliver any property to any person, or to make, alter or destroy the whole or any part of a valuable security, or anything which is signed or sealed, and which is capable of being converted into a valuable security, shall be punished with imprisonment of either description for a term which may extend to seven years, and shall also be liable to fine.

The Claim turned out to be ‘False’

In our fact check the claim in the WhatsApp forward turned out to be ‘False’.