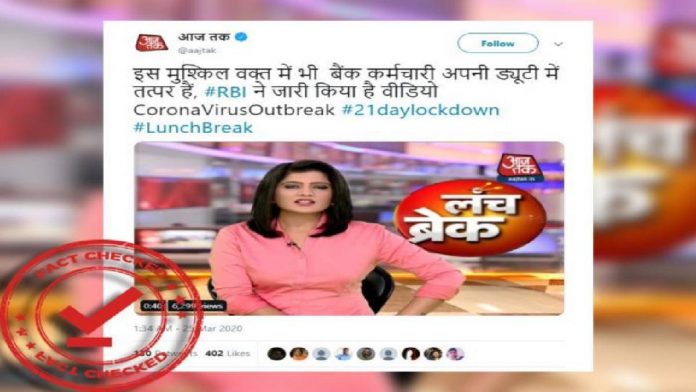 RBI has issued a video of its office.

Media and news outlets across the world are infamous for misreporting on sensitive issues, in many of our fact-checks we have debunked media and news outlets. In yet another incident of misreporting on Covid-19 which is as serious an issue that it has been declared a pandemic by the WHO, media outlet Aaj Tak, that itself fact-checks and is also a subsidiary of TV Today Network that owns the fact-checking and news outlet India Today, posted a video on their Twitter handle with the claim that the said video is released by the Reserve Bank of India.

Aaj Tak has deleted the video, however, an archived version of the aforementioned tweet can be viewed here.

The same video was also amplified in a show run by the outlet namely ‘Dangal’.

In the video by the outlet on Twitter, when the alleged visuals of the RBI office are playing, the anchor says that the RBI has released this video to show how their employees are fighting the novel coronavirus by cooperating with the Reserve Bank. The anchor further explains the visuals and says, “We are showing this footage to you so you know that these RBI officials do not leave and working hard to serve you better.”

As we began fact-checking the video, we found a tweet made by Yogesh Dayal who is the Chief General Manager of RBI’s department of communication. Mr. Dayal’s tweet not just rubbishes the claim made by the media outlet but also appeals to the outlet to verify the facts before reporting. His tweet reads, “#RBI  ने नहीं जारी किया है यह या कोई भी वीडियो। कृपया upload करने से पहले इसकी सत्यता की जांच करें। Be responsible in reporting and telecasting.”

We also found a tweet made by a Twitter user namely ‘Tarun Kumar Das’ who is the Chief Manager of the Punjab National Bank’s Lucknow-based Vidhan Sabha Marg branch. Mr. Das has tagged Aaj Tak’s journalist Rohit Sardana who hosts the show ‘Dangal’ for the outlet and has informed him of the video belonging to PNB’s office and not of RBI’s.

@sardanarohit The video of bank employees shown in your program DANGAL today is of PNB not RBI.

Based on the testimony of Yogesh Dayal who is a CGM of RBI’s communication department and Tarun Kumar Das who is a branch manager of Punjab National Bank, we reached the conclusion that the video shared by the outlet is ‘Misleading’.

Saurabh Pandey
The reason why he chose to be a part of the Newschecker team lies somewhere between his passion and desire to surface the truth. The inception of social networking sites, misleading information, and tilted facts worry him. So, here he is ready to debunk any such fake story or rumor.
Facebook
Twitter
WhatsApp
Linkedin
Previous articleIndian Government Has Not Issued Any Guideline To Monitor Citizens Activity, Fake Advisory Resurfaced
Next articleAmitabh Bachchan Shared A Misleading Claim Stating India Has Got Its First Official Coronavirus Dashboard