Muslims are being buried alive in India

Muslims are being buried alive in India. pic.twitter.com/KghAvgCtP5

A 1 minute 40 second long video, claiming that Muslims are being buried alive in India, is doing the rounds on social media . In the disturbing video, a man can be seen burying a woman and a child.

Muslims are being buried alive in India. pic.twitter.com/KghAvgCtP5

Nazir Ahmed , Pakistan origin British Member of Parliament also shared the viral video on his official Twitter handle. His tweet reads, “Warring: horrific video of a mother and Child buried alive in India by fascist. Thank God he has recovered (sic).”The tweet garnered more than one lakh views. However later on, he deleted the tweet. 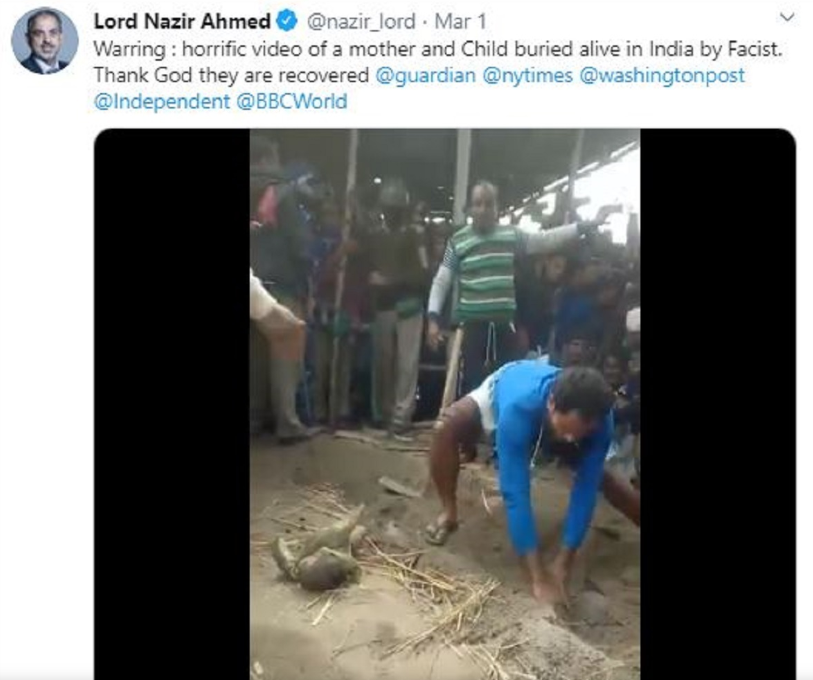 Notably, we found that the same video was also shared on Facebook here and here; on YouTube here ; and on Twitter here and here alongside a different claim.

With help of the relevant keywords search, we found a report published on January 31, 2020 by eisaytimes.indiatimes.com with title “’The young man murdered his wife and children”. According to the report, the incident happened in West Bengal’s North Dinajpur. As per the report, a man named– Akbar Ali allegedly murdered his wife and their one month old child and buried their bodies.

Ali buried the dead bodies near his residence, which were exhumed in the presence of a magistrate. The bodies were sent to Islamapur Hospital morgue for autopsy. The enraged locals vandalized Ali’s house. However, he managed to escape and fled from the village. 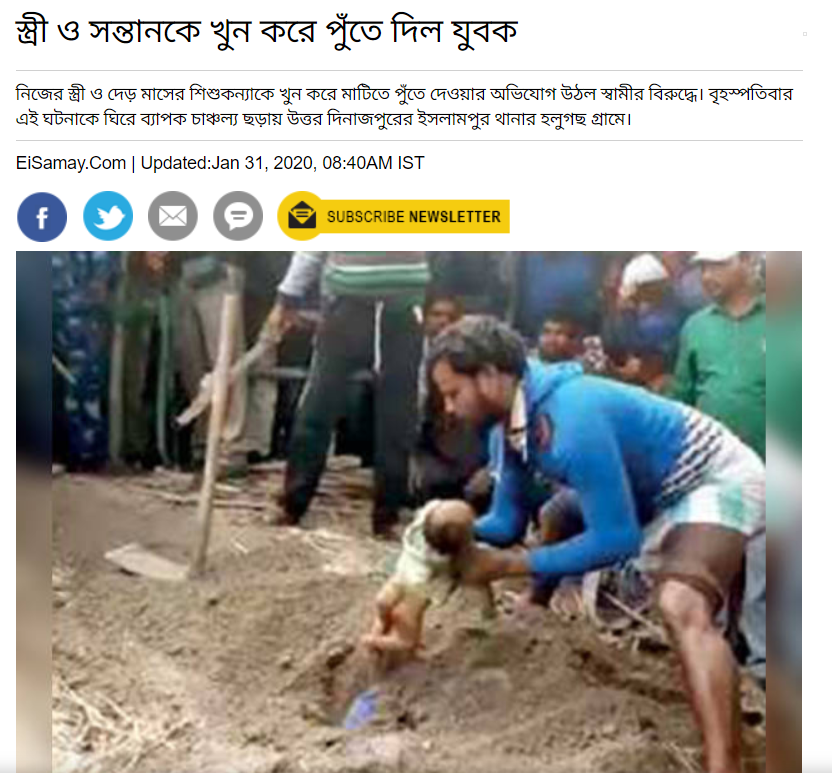 During our search, we also found a media report by News18Bangla and Mahanagar24x7 Bengali which carried out the same report of the incident that happened in West Bengal’s North Dinajpur.

(If you would like us to fact check a claim, give feedback or lodge a complaint, WhatsApp us at 9999499044.You can also visit the Contact Us page and fill the form)

Shaminder Singh
Shaminder started off his career as a freelance journalist for a consulting and research firm. He has been a Political Strategist and Media Manager. Before joining Newschecker, he worked with various reputed media agencies like Daily Post India, PTC News.
Facebook
Twitter
WhatsApp
Linkedin
Previous articleFake News Alert! 28,000 Coronavirus Patients Have Been Cured By US Vaccine
Next articleNo, Dean Koontz’s Thriller Novel ‘The Eyes Of Darkness’ Didn’t Predict The Coronavirus Outbreak