It happened for good that the Muslim man who was asking Hindu girls for a hug has been killed otherwise more Hindu girls would have fell prey to becoming the mother of another Taimur with a Jihadi father. Those who aren’t affected must beware.

A collage of 9 pictures is going viral on Social Media with the claim that a Muslim man was asking Hindu girls for a hug but he was killed in a bomb attack. First eight pictures show a Muslim man asking for a hug and the ninth picture shows fire waves.

By performing a simple reverse image search, we found that the first 8 pictures of the collage are taken from a video which was recorded to perform a social experiment.

When we matched the keyframes of the videos with the pictures in the viral college, we got to know that all first 8 pictures are screengrabs from the video hence it is proved that the man shown in the pictures was not killed in any bomb attack but merely played a role in a video shoot for a social experiment. 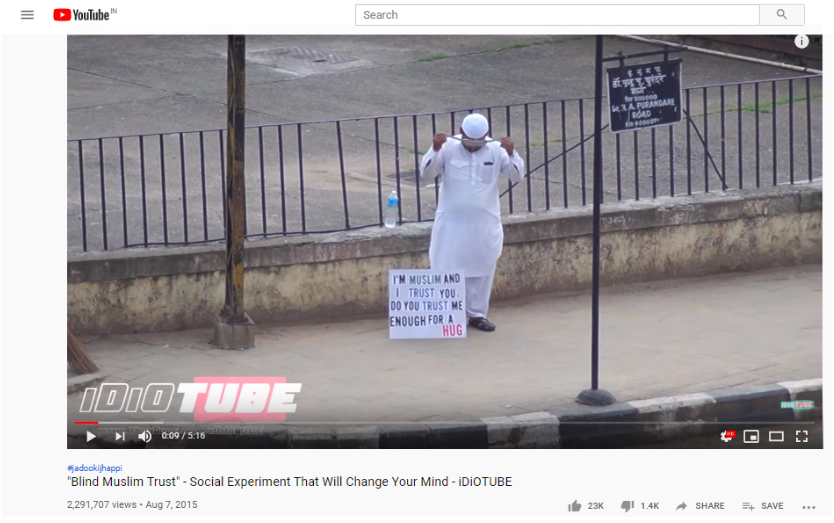 When we performed a reverse search on the ninth image, we found that the image is old and it was first published in a report by The Guardian on 29 October 2016. The report informs that the two suicide bombers kill at least nine in Maiduguri.

Two suicide bombings rocked Nigeria’s northeast city of Maiduguri on Saturday, killing at least nine people and injuring scores of others, emergency services said.One explosion happened outside a gas station, while the other was near the Bakassi camp for internally displaced persons (IDP), underscoring the continued threat from Boko Haram jihadists who are suspected of being behind the attacks.

Hence it is evidently clear from our finding that the image is being shared in a wrong context.

Facebook
Twitter
WhatsApp
Linkedin
Previous articleCoronavirus: Here’s All You Need To Know About COVID-19
Next articleMessages Viral On Social Media About Coronavirus Are FAKE! Here’s A Fact Check