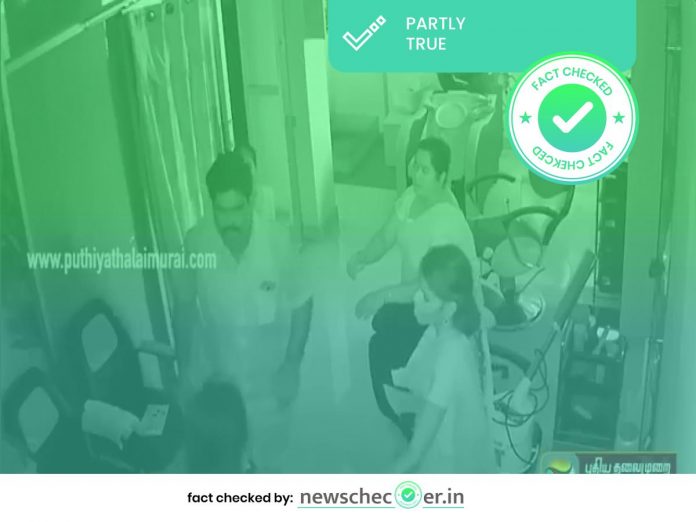 Video of a man assaulting a woman is being shared with a claim that a DMK party leader Selva Kumar kicked a lady doctor on duty.

The two-minute video was shared with a claim that reads, “Tamil Nadu DMK party leader Selva Kumar kicked lady doctor on duty. Forward this video to all group until he will be punished.”

You can see examples of this claim being shared on Twitter below.

We found this claim to be circulating since last year on Facebook. The virality of it can be viewed here.

Also Read: Viral Photograph Of Sonia Gandhi With Book “How To Convert India Into Christian Nation” Is Edited

Newschecker found that this incident dates back to September 2018. “A former DMK councillor Selva Kumar was caught on camera brutally attacking a woman inside a beauty parlour,” reported Times of India on 18 September 2018.

The Times of India’s report read, “In the CCTV video, the councillor can be seen kicking the woman on her thighs at least three times. The woman can be seen writhing in pain and trying to get away from the assaulter. The DMK leader was apparently angry due to a monetary dispute between the two of them. After the video went viral, the police have arrested Selva Kumar. Also, the DMK has suspended him from the party.”

ANI tweeted about the incident in September 2018.

The incident took place at Mayuri Beauty Parlour, as per a report by The News Minute. Sathya, the parlour’s owner and the one seen assaulted in the video had alleged financial dealings with Selvakumar. She registered a case with the police months later, after which he was arrested.

Also Read: Video Posts With Claims Of A Gigantic Moon Appearing Between Russia And Canada In Arctic Are False

The claim that DMK leader Selvakumar kicked a lady doctor on duty is misleading. The video is in fact from 2018 and shows him assaulting a woman in a beauty parlour.