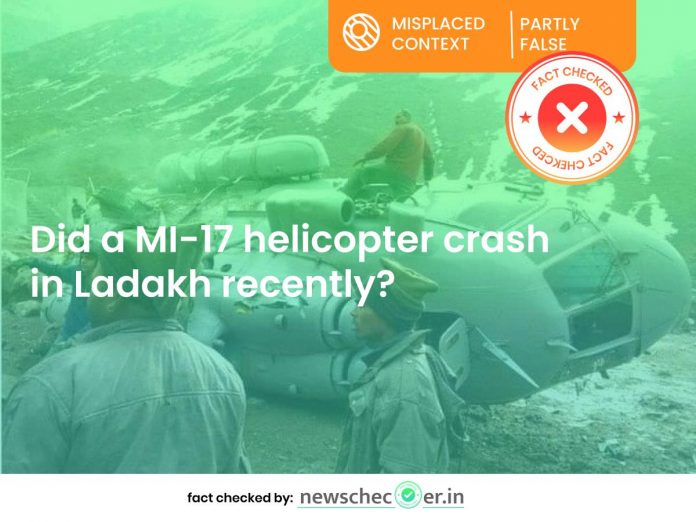 A social media user claimed that an Indian MI-17 helicopter crashed in Ladakh on 13 September 2020. The user, Irmak Idoya इरमक ईड्या, shared an image which shows a helicopter crash with this claim.

Mubasher Lucman, an anchor and investigative journalist in Pakistan (as per his Twitter profile) shared a similar claim which received 9.5K likes and 2.1K retweets at the time of writing this fact check.

A reverse image search of the photograph in the claim led us to an April 2018 article published by Times of India (TOI). Titled, “IAF helicopter collides with iron girder, catches fire; one person killed,” the article reports on an Indian Air Force cargo helicopter MI-17 catching fire while landing in Kedarnath in April, 2018.

The photograph from the claim is included in the TOI article along with other images from the crash in Kedarnath. Carrying construction material from Guptkashi to Kedarnath, the MI-17 chopper “reportedly caught fire after it hit an iron girder while it was attempting to land in a helipad near the Kedarnath temple.”

On 15 September, Press Information Bureau Fact Check debunked the claim stating, “The claim is #Fake. The wreckage exhibited is of a helicopter crash that happened in 2018 near Kedarnath, Uttarakhand. No such incident has taken place recently anywhere in #Ladakh.”

This claim is being widely circulated on social media as India, China stand-off in eastern Ladakh continues. In recent news, both countries have alleged the other of firing shots in the air as a provocation.

Recently, we debunked another claim attributed to India, China clashes in eastern Ladakh.

Our research makes it clear that the photograph in the claim is from an Indian Air Force MI-17 helicopter crash in Kedarnath, Uttarakhand in April 2018. The cargo chopper collided with an iron girder while attempting to land near Kedarnath temple.