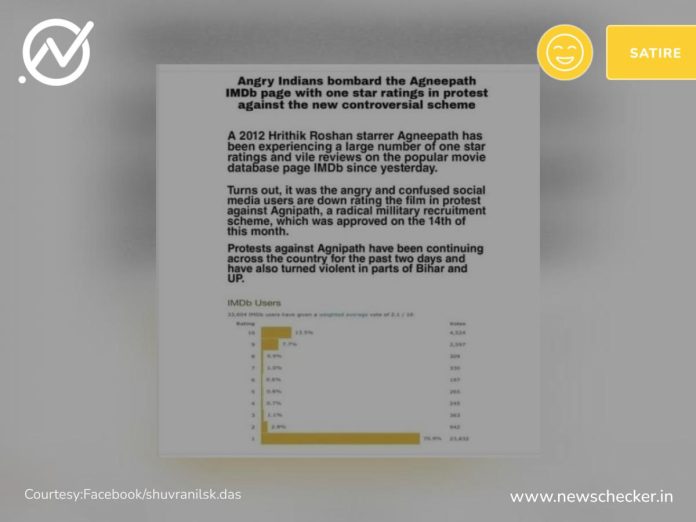 The announcement of ‘Agnipath’ scheme for recruitment of youths to the Indian Armed Forces, followed by a spate of protests around the country has become a major talking point  on the news as well as social media platforms over the past few days. While several social media users shared images and videos showing agitation against the scheme, few users also shared an image claiming to show the fall in IMDb ratings of 2012 Bollywood movie Agneepath as a part of the protests. Newschecker found the viral claim to be a satire.

The post claims that the Hrithik Roshan starrer has been receiving one star rating on IMDb as “the angry and confused social media users are down rating the film in protest against Agnipath.” Those who shared the image and interacted with the such posts lashed out, mocked and took a jibe at such protesters.

Agneepath Vs Agnipath- The Confusion

Centre has launched ‘Agnipath’ –  new policy for recruitment to the armed forces. Under this, only 25% of the the recruits, who will be known as ‘Agniveer’, will be re-inducted as permanent members of the armed forces and the remaining will be freed after 4 years of duty.  Approximately 45,000 people between the ages of 17.5 and 21 will be inducted into the service for a four-year period under the scheme. This short-term recruitment plan has massed strong reactions from the opposition as well as the armed forces aspirants resulting in widespread protests across the country.

Meanwhile, Agneepath is a 2012 Bollywood film featuring Hritikh Roshan, Priyanka Chopra Jonas and Sanjay Dutt in the lead roles. As per the IMDb website, the movie is about a young boy, whose father is lynched before his eyes, who returns for revenge fifteen years later.

We looked up Agneepath on the official website of IMDb and found that the movie was rated at 6.9 on 10 by around 24k users -while the viral screengrab shows the total vote count to be over 33k.  Mere 4.1% and 1.4% users have rated the 2012 movie at 1 and 2 respectively, unlike the massive voting on these ranks as seen in the viral screengrab.

Further, we scanned through various posts carrying the alleged image of IMDb rating of Agneepath and found a post by Facebook user punita.toraskar featuring a screengrab of the viral image from the Instagram account of user Andheri West Sh*t Posting.

Taking a clue, we looked up the official account of Andheri West Sh*t Posting on Instagram and found that the viral image was posted by the ‘community’ two days back with several users pointing out that it is a meme.

On scanning the account, we found that most of the content was comic or satirical in nature.  It’s bio read, “Your friendly neighborhood Sh*tposting page.” We also inspected the display image of the account and found the phrase “Andheri West Memes” written on it in Hindi.

The About Us section of its Facebook account (@AndheriWestMemes ) reads, “If you’re here for Andheri West based memes/information, then you’re gonna be really disappointed. We put up any random sh*t without any particular pattern.”

A keyword search led us to an article published in Vice, dated January 15, 2021, with the title ‘This Viral Meme Page Went From Sh*tposting to Becoming a Pandemic Helpline.’

The report quoted one  Balram Vishwakarma, who started the Andherwestsh*tposting as a page on Facebook in March 2018, saying, “Sh*t posting because I like to surround myself with irony. And imagine someone who picked up an argument with me would be spending his time arguing with a sh*tposting page.”

Viral claims that “angry and confused” social media users have down rated the 2012 Hrithik Roshan-starrer Agneepath as a part of protests against the government Angipath scheme actually stemmed from a meme page.