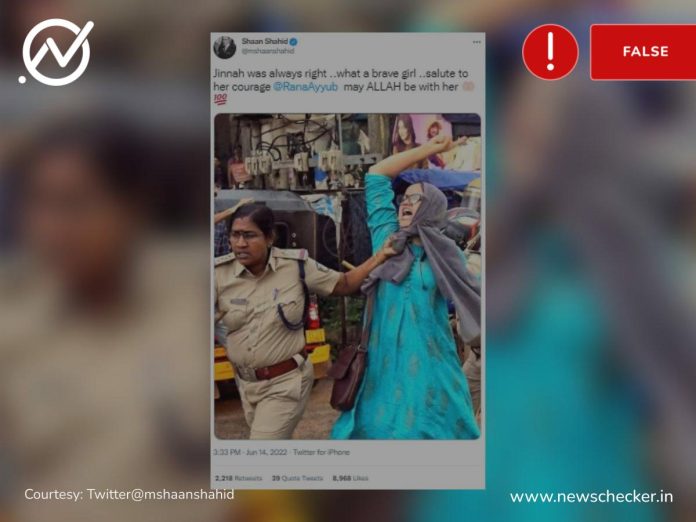 Amid the ongoing controversy over comments made by now-suspended BJP spokesperson Nupur Sharma on Prophet Mohammad, protests erupted in many states which were followed by crackdown. Soon after protests in Uttar Pradesh, bulldozers razed allegedly ‘illegal’ houses of many protesters. Many condemned the state crackdown, while others protested against the UP police’s actions. In light of these events, an image of a police officer dragging a woman away by her hijab is going viral on social media, with users identifying her as journalist Rana Ayyub. Newschecker found the claim to be untrue.

The image has been shared on Twitter by user @mshaanshahid who is a leading actor in the Pakistan film industry with 6,38,100 followers on the platform. The tweet has garnered 8,968 likes and 2,218 retweets on the platform. The image has been shared along with the caption ‘Jinnah was always right ..what a brave girl ..salute to her courage @RanaAyyub may ALLAH be with her’.

Newschecker found similar claims on Twitter with the same caption.

On conducting a reverse image search on the viral image, we found a news report by Arrahmah titled The Prophet’s Protest Was Insulted, Muslim Activist Beaten By Indian Police And Withdrawn Her Hijab uploaded on 13th June, 2022. The news report carried the same image present in the viral tweet.

According to the report, the woman in the image is Muslim student leader and national secretary of the Brotherhood Movement, Aysha Renna who was injured during a protest in Malappuram, Kerala. Her hijab was also pulled open.

Afreen Fatima is the daughter of activist Javed Mohammad, who is currently the prime suspect in the violence that broke out in Prayagraj following protests against statements by Bharatiya Janata party (BJP) spokesman Nupur Sharma who insulted the Prophet Muhammad.

The article also contained a tweet by a journalist with the username @shaheenjournal which showed a video of Aysha Renna being roughed up by the police. The video was shared along with the caption ‘Muslim Student leader @AyshaRenna sustained injuries during lathicharge in Kerala’s Malappuram. She was leading a protest against the demolition of Muslim houses in UP. Renna tells @MaktoobMedia that she was humiliated by a police officer while she was in detention.’

Upon further investigation, Newschecker found a Facebook post by the verified page of  Fraternity Movement Kerala which is a political organisation according to its Facebook page which carried newspaper clippings of the incident in Malappuram and one of the reports carried the same image present in the viral image.

We checked the Facebook page of Aysha Renna and found a poster of the ‘National Highway Blockade’ in Malappuram on June 12 against the demolition of the house of Afreen Fatima in Prayagraj.

The video clearly shows the protestors being lathi-charged and being dragged away by the police. The video has the same frame as seen in the viral tweet.

We also checked to see if there was any news of journalist Rana Ayyub being arrested for a protest but did not find any media reports.

Newschecker’s investigation reveals that the woman in the viral image is student leader Aysha Renna who was arrested in Malappuram, Kerala for protesting against the demolition of the house of Afreen Fatima in Prayagraj, UP and not journalist Rana Ayyub.

Vaibhav Bhujang
Vaibhav is a part of Newschecker’s English team, where he spots and debunks all kinds of misinformation, making the rounds on the internet. A Journalism graduate from St. Xavier's College, Mumbai, he holds an M.A degree in Philosophy and an M.Phil from Delhi University.
Facebook
Twitter
WhatsApp
Linkedin
Previous articleWeekly Wrap: Misinformation On Crackdown On UP Protesters, Fake News Of Railway Concession Resuming, & More
Next articleHrithik Roshan’s Agneepath Down Voted On IMDb Amid Agnipath Protests? No, Viral Claim Is Satire