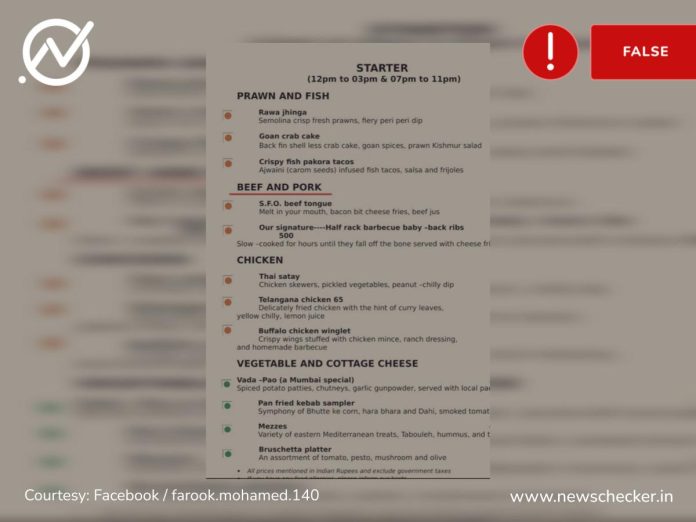 An image of a menu card is going viral claiming to show that beef and pork dishes are served at Silly Souls Cafe and Bar, which is allegedly operated by Union Minister Smriti Irani’s daughter Zoish Irani.

Archived linked to the same can be found here.

Further, we found an image of the same menu card on Zomato which was identified as the menu card of the Upper Deck restaurant. Both -the viral image and the Zomato image- are alike.

A quick search for “beef” in Upper Deck’s menu on Justdial also yielded the same dishes in the “Beef and Pork” section.

Additionally, the news website The Lallantop quoted an employee at the Upper Deck saying,  “This is a picture of our restaurant. Although this menu is a year old. Beef has been removed from the new menu and now beef has to be ordered separately from the menu.”

We can thus conclude that the viral image of the food menu card does not belong to a cafe allegedly run by Smriti Irani’s daughter. However, we could not independently verify whether beef or pork is served at Silly Souls cafe or not.

Vasudha Beri
Vasudha noticed the growing problem of mis/disinformation online after studying New Media at ACJ in Chennai and became interested in separating facts from fiction. She is interested in learning how global issues affect individuals on a micro level. Before joining Newschecker’s English team, she was working with Latestly.
Facebook
Twitter
WhatsApp
Linkedin
Previous articleDid PM Modi Ignore Former President Kovind At Farewell Ceremony? No, Viral Clip Shared Out Of Context
Next articleVideo Of A Newborn With Rare Genetic Disorder Viral With False Claim