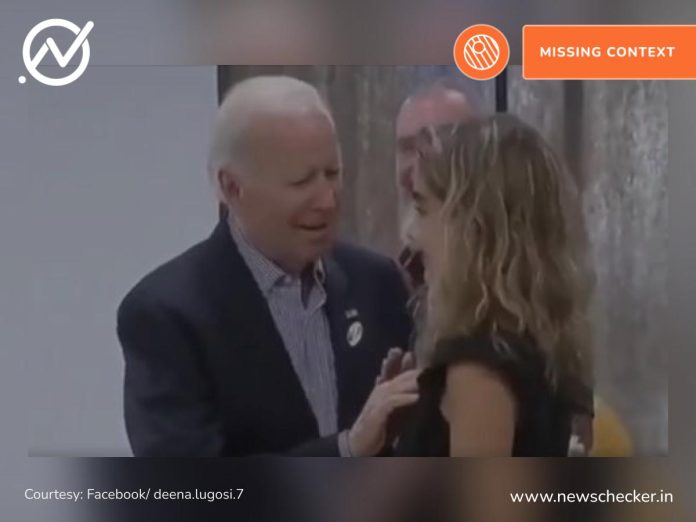 A footage of Joe Biden with a young girl is going viral on social media platforms, with users claiming it to be videographic evidence showing the US President touching his granddaughter inappropriately. Newschecker found that the viral clip is being shared out of context. Though the girl seen in the video is indeed Biden’s granddaughter, he was putting a voting sticker and not touching her improperly.

Several Twitter users shared the video claiming to show how “Biden groped his granddaughter in front of the world.”

The five-second-long-clip is also doing the rounds on Facebook.

A Yandex reverse image search on the keyframes of the viral video led us to a report by Reuters, dated October 30, 2022, titled ‘Biden casts early vote, hits out at stop the steal.’

Post casting their votes, Natalie places a voting sticker on the US President’s coat. After this, Biden with a sticker in his hand, asks Natalia, “Which side do you want it (sticker) on?,” to which Nataline says, “this side.” Biden then puts the sticker where her granddaughter gestured, immediately withdraws his hand and kisses her on cheeks – the snippet that is being shared widely out of context.

Following this, we conducted a keyword search for “Biden,” “granddaughter,” & “cast vote” on YouTube which yielded a video by NBC News, dated November 4, 2022. The video also depicted the same sequences of events as seen in the Reuters’ footage.

Multiple other news outlets carried the video showing Biden and his granddaughter casting their ballot for midterm elections at an early polling place in Wilmington, Delaware in October 2022. Such reports can be seen here, here and here.

We also found a video uploaded on the official YouTube channel of Joe Biden on November 3, 2022, in which Natalie Biden shares her first time voting experience. The “I Voted” sticker can be seen placed near her right neckline.

Hence, a longer version of the viral video makes it clear that Biden was not inappropriately touching his granddaughter, but was rather putting a sticker near her neckline.

We could thus conclude that a clipped version of a video is being shared out of context to claim that US President Biden was seen inappropriately touching his granddaughter.

Vasudha Beri
Vasudha noticed the growing problem of mis/disinformation online after studying New Media at ACJ in Chennai and became interested in separating facts from fiction. She is interested in learning how global issues affect individuals on a micro level. Before joining Newschecker’s English team, she was working with Latestly.
Facebook
Twitter
WhatsApp
Linkedin
Previous article
6,000-Year-Old Rock Engraving Of Lord Ram, Hanuman In Iraq? Here’s What We Found
Next article
Not Shahrukh Khan, His Doppelganger Dancing In This Viral Wedding Video

No, Viral Video Does Not Show Rare Visuals From Kailash Mansarovar Yatra