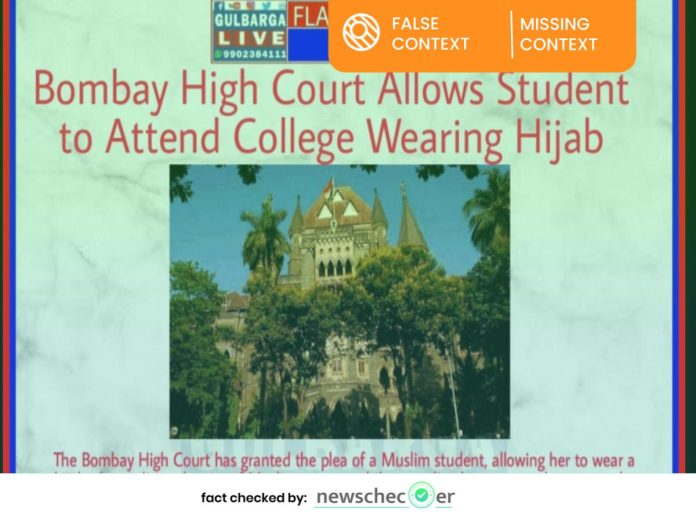 Pronouncing it’s final verdict of the Hijab row on March 15, 2022 the Karnataka High Court  upheld its interim order from February 10, 2022 disallowing students from wearing the hijab to classrooms, stating that it was not an essential religious pratice in Islam.

But contrary to the Karnataka HC verdict, several social media users are claiming that the Bombay HC has permitted students to wear hijab in educational institutions in Bombay.

A Facebook page named ‘Gulbarga Live’ claims that the Bombay HC has granted the plea of a Muslim student and allowed her to wear the Hijab while attending classes in a college in Thane, Mumbai.

Similar posts are also saying that the alleged Bombay High Court verdict comes as a ‘befitting response’ to the judgement by Karnataka High Court.

What is the Hijab row?

What started as a few female students being stopped from entering the premises of their educational institutions in Udupi, Karnataka, the controversy over wearing the hijab to classes became a nation-wide debate in the ensuing weeks.

Famously now known as the Karnataka Hijab row across the country, the incident has gained a lot of attention from the media and public alike.

However, the hijab row has also become the hot bed for misinformation.

Over the past few weeks Newschecker has debunked many claims related to the incident. The claims ranged from an alleged burqa clad man being arrested for stone pelting on the police to misleading claims about a college student from Karnataka named Muskaan going viral.

All the claims viral around the incident fact checked by Newschecker can be found here.

To ascertain whether the claim made by these posts is true or not Newschecker investigated this further by conducting a keyword search for the words “hijab bombay high court” to look for the alleged judgement.

This led us to fact checks on the matter done by The Quint, The Logical Indian and factly, to name a few.

The article referred to the verdict pronounced by the Bombay High Court in the case of a writ petition filed in front of it by a student “seeking directions to the college and university to either allow her to attend college wearing the hijab or transfer her to another college where she could practice her religious beliefs without any restriction.”, as per News 18.

On tallying the contents of the article by News 18 and the Facebook post by ‘Gulbarga Live’ we found out that the post had used the text from the said article.

Further, using the phrase “bombay high court allows student to attend college wearing hijab” we further came across articles by The Indian Express and The Asian Age from 2018 on the same matter.

All the articles referred to a student of a homoeopathy college in Mumbai who filed a petition in front of the Bombay High Court. The petition was regarding her appeal regarding her college not allowing her to wear the hijab on college premises.

Thus, the articles make it clear that the claims made by users on social media in 2022 are actually referring to a 2018 verdict by the Bombay High Court.

The claims made by Facebook users about an alleged recent verdict by the Bombay High Court upholding the right to wear hijab in educational institutions are false. No such verdict has been pronounced by the Bombay HC. These claims are actually referring to a ruling regarding a writ petition by the HC in 2018.

Preeksha Malhotra
Preeksha is a journalism graduate interested in exploring and working on the phenomenon of fake news globally. She desires to work on compelling stories that employ digital journalism to bring forth narratives that matter. She is also a budding researcher, studying the COVID-19 infodemic as a research fellow with the Institute of Economic Growth.
Facebook
Twitter
WhatsApp
Linkedin
Previous article
Viral Video Of Sikh Man Being Thrashed In Pakistan Is Actually From Ludhiana
Next article
Video Showing Raging Forest Fire Not Linked To Plane Crash In Southern China