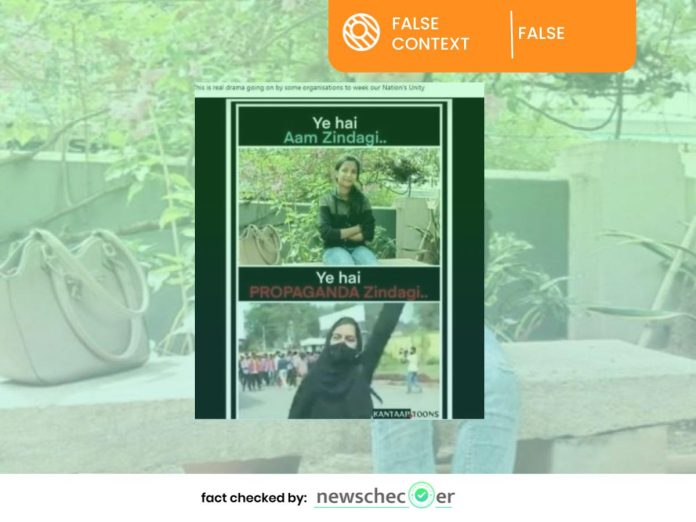 Amid the ongoing ‘Hijab Vs Saffron Shawl’ protests in Karnataka, a video of a lone Burqa-clad woman clapping back at hecklers with “Allahu Akbar” slogans at a college in Mandya dominated the social media platforms this week. Soon after, several social media users shared images of a girl in western attire, identifying it as Karnataka college student Muskan, the girl seen in the viral video. However, Newschecker has found that the claim is misleading.

Facebook users shared the viral image claiming that the woman wore a burqa to college for ‘propaganda’ purposes.

Another image is doing rounds on social media with the same claim.

Newschecker received multiple requests on our WhatsApp tipline (+91-9999499044) to fact check this image.

The row that started at a government college in Udipi district last month after some Muslim girls were barred from entering into classrooms for wearing hijab, has resulted in a state-wide outrage and metamorphosised into ‘Hijab Vs Saffron Shawl’ protest in Karnataka.  Recently, a video of a Burqa-clad woman chanting “Allahu Akbar” when confronted by a group of saffron-clad boys had gone viral on social media.

You can read our other fact checks related to the ‘Hijab Vs Saffron Shawl’ protests here and here.

To verify the veracity of the claim, Newschecker began by  attempting to ascertain the identity of the Burqa-clad woman in the viral video. We conducted a keyword search for ‘Burqa-clad woman Allahu Akbar Karnataka college’ and came across a report by the India Today, dated February 8, 2022, titled ‘Hijab row: Karnataka student says she ‘screamed Allah hu Akbar’ after hecklers ‘shouted Jai Shri Ram.’

The report stated, “The Karnataka student who was seen in the viral video from Mandya district said she shouted Islamic slogan, Allah hu Akbar, in response to the sloganeering by a mob wearing saffron scarves when they heckled her outside the college. The college student, identified as Muskan, told India Today TV elaborating what happened during the incident.”

The report also carried a video featuring Muskan who can be heard narrating her side of the story.

A video report by NDTV also identified the Burqa-clad woman in the viral video as ‘Muskan.’

After ascertaining that the burqa-clad girl in the video is Muskan, a student at a college in Karnataka’s Mandya, we conducted a Google reverse image search on the first image. We found that the viral photo belongs to one Najma Nazeer Chikkanerale. According to her Facebook profile, Chikkanerale is a member of the Janata Dal Secular and lives in Bengaluru. She had posted the image on her Facebook account on May 13, 2018.

Newschecker team reached out to Chikkanerale who confirmed that the viral picture is hers and not Muskan’s. She said, “This photo is not Muskan’s but mine. I came to know about Muskan only after the hijab row. People are circulating this misinformation to spread hatred for me and Muskan. People are trying to defame me. They want to destroy my political career.”

We continued our investigation. Newschecker conducted a Google reverse search on the second photo and found it has been altered. The image was posted by Tanya Jena, a model and social media personality, on her Instagram account in 2019 and some miscreants morphed Chikkanerale’s face on Jena’s image to create spread the narrative that the ‘burqa-clad girl generally wears western clothes and donned a burqa only for propaganda.’

The Burqa-clad woman in the viral video who chanted ‘Allahu Akbar’ when confronted by a group of saffron shawl-clad boys in Karnataka’s Mandya is Muskan and not the woman wearing western clothes in the viral images.

Vasudha Beri
Vasudha noticed the growing problem of mis/disinformation online after studying New Media at ACJ in Chennai and became interested in separating facts from fiction. She is interested in learning how global issues affect individuals on a micro level. Before joining Newschecker’s English team, she was working with Latestly.
Facebook
Twitter
WhatsApp
Linkedin
Previous article
Actor Gagan Malik Has Become A Monk? No, Viral Claim Is Misleading
Next article
Weekly Wrap: From Old Video Of Yogi Distributing Cash, Fake Posts Around Hijab Row & More

No, Viral Video Does Not Show Rare Visuals From Kailash Mansarovar Yatra