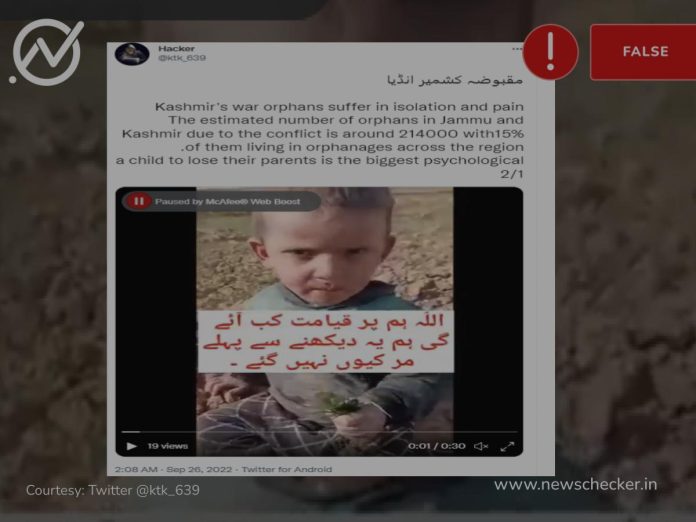 Social media users are sharing a video showing a child eating grass, claiming it to be from the valley. A twitter user @ktk_639 has shared the same video claiming that the video shows a ‘war orphan from Kashmir’.

The archive version of the same can be seen here

To ascertain whether the video is from Kashmir, Newschecker looked up the keywords “Child eating grass” on Google.

We found that the video has been in circulation online in various contexts before. We found several posts as recent as September, claiming that the video showed the plight of children in flood hit Pakistan.

You can check the videos here, here and here

Dua Bhutoo, Member Sindh Assembly in Pakistan, was among those who shared the video with the hashtag #FloodsInPakistan2022. The caption of the video in Urdu reads “What doomsday are we waiting for? This is doomsday. Forgive us son”.

On further research, we found that the same video was also shared in context of the Ukraine-Russia war earlier in March this year. Users who shared the video claimed that the Ukrainian child was eating grass to survive the war.

Link to the video here, here and here

We further  traced back the video to February 2022. Political activist Atif Maqbool shared the video on his YouTube channel on 25 February 2022, with the caption reading, “The video, which went viral on social media, is from Syria. In this video, it can be seen that a child is eating grass due to lack of food. Of course, watching such videos makes everyone very sad.”

“On the one hand, countless people all over the world are thirsty for food, on the other hand, all the major countries of the world spend 90 percent of their money on buying and selling weapons”, Atif questions.

Link to the video here

Sakshi.com published a report on the same video on March 3, 2022, and clarified that the video was from Syria and not Ukraine.

Thus, it is clear that the video of a child eating grass is not from Kashmir. While we have not been able to trace the original source of the video, the video is not recent and has been viral in different contexts over time.