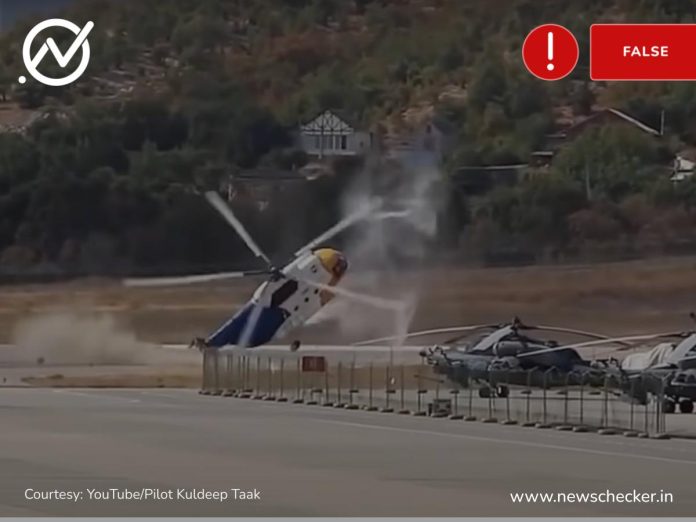 The archive link of the tweet can be seen here.

Newschecker began by analysing the video carefully and found the number three on the right top corner of the video, indicating that the footage was part of a compilation of videos. Further, we conducted a keyword search on YouTube, with the keywords ‘top helicopter crashes’, and verified the first result that the search threw up, which was a video compilation, titled “Top 20 dangerous Helicopter Crashes in 10 minutes | top 20 Helicopter crash accident compilation”, posted by a YouTube channel Pilot Kuldeep Taak in 2020. On analysing the compilation, we found that the viral video was indeed from the compilation, and featured third in the list.

We further conducted a reverse image search of the keyframe on Yanddex which took us to a report on Military.com from September 2014, titled “Fatal Mi-8 Helo Crash at Russian Air Show”.

The report carried the same video, and revealed that the mishap took place during the “opening phases of the Gidroavisalon 2014 in Gelendzhik (a black sea resort town in Russia), an international hydro air show that gathered 180 Russian companies and 14 foreign delegations.”

We also found other similar reports from 2014, as can be seen here, and here.

Pankaj Menon
Pankaj Menon is a fact-checker based out of Delhi who enjoys ‘digital sleuthing’ and calling out misinformation. He has completed his MA in International Relations from Madras University and has worked with organisations like NDTV, Times Now and Deccan Chronicle online in the past.
Facebook
Twitter
WhatsApp
Linkedin
Previous article
6-Year-Old Jailed Under SC/ST Act In Uttarakhand? Here’s The Truth Behind The Viral Claim
Next article
Viral Video Of Chopper Crash In Ukraine Is Actually From US