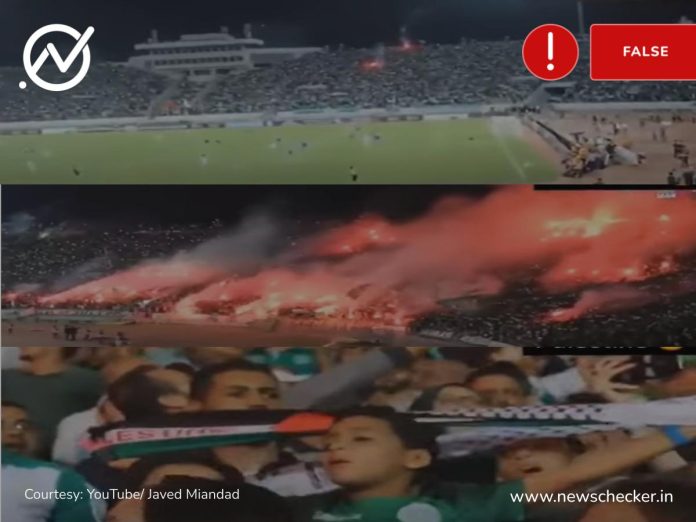 The Qatar FIFA WC 2022 has managed to gain attention for reasons more than just football- from strict rules by the host country, to allegations of conversion and canvassing to Islam. Social media has also seen much proliferation of fake news around the sporting event. The latest addition to this is a video allegedly showing the audience singing in support of Palestine during a world cup match. Newschecker has found that the claim is false.

Several Twitter users shared the video with the caption, “First time in world’s History.Whole Qatar FIFA stadium sung together unitedly in favour of Palestine against Jews and Israel (sic.)”

Links to such videos can be found here, here and here.

The captions of the video (in Portuguese and English) suggest that the crowd was singing a pro-Palestine song. On carefully analysing the video, we could hear the word “Palestina” several times. In addition, we spotted a child holding a banner saying “Palestine” in the viral footage.

Taking a clue, we conducted a keyword search for “crowd singing”  “minha amada palestina” & “stadium” on Google which led us to a YouTube video by RA, dated September 30, 2019, titled ‘100k football fans sing for palestine in morroco (sic).’ The description of the video read, “Palestine football crowd song.”

On comparing the keyframes of the viral footage with the YouTube video, we could conclude that they both are from the same event.

The description section of the video elaborated on the support extended by Raja Casablanca (a football club based in  Casablanca, Morocco) fans to Palestinian cause.

Furthermore, we translated keywords “Raja Casablanca fans,” “Palestine” &  “support” in Arabic with the help of Google and looked up the same on the search engine. The time frame of the search was fixed from September 23, 2019 to September 30, 2019. This led us to several reports from the said time period elaborating on the incident.

One such report by Arabic Post, dated September 24, 2019, stated, “Moroccan Raja Casablanca fans celebrated the Palestinian team Hilal Al-Quds, during the match on Monday, September 23, 2019 in the 32nd round of the Mohammed VI Football Cup competitions.” Adding,”The crowd in the stadium chanted the famous Raja song, Rajawi Palestinian…”

The report also featured a YouTube video identical to the viral footage. The same can be seen below.

Several other Arabic news outlets also reported on the incident. Such reports can be seen here, here and here.

We could thus conclude that the viral video actually shows visuals from a 2019  Mohammed VI Football Cup match that took place between Raja Casablanca and  Hilal Al-Quds at the  Mohammed V Stadium in Casablanca, Morocco.

Viral posts claiming to show spectators breaking into a song in support of Palestine during a FIFA World Cup match at a stadium in Qatar are false.

Vasudha Beri
Vasudha noticed the growing problem of mis/disinformation online after studying New Media at ACJ in Chennai and became interested in separating facts from fiction. She is interested in learning how global issues affect individuals on a micro level. Before joining Newschecker’s English team, she was working with Latestly.
Facebook
Twitter
WhatsApp
Linkedin
Previous article
FIFA World Cup 2022: Football Match In Qatar Temporarily Halted During Azaan? No, Video Viral With False Claim
Next article
No, Jio Did Not Take A Dig At Journalist Nidhi Razdan Over ‘Unpaid Bill’

PM Modi Called Himself ‘Son Of A Pathan’? No, Old Video Shared Out Of Context