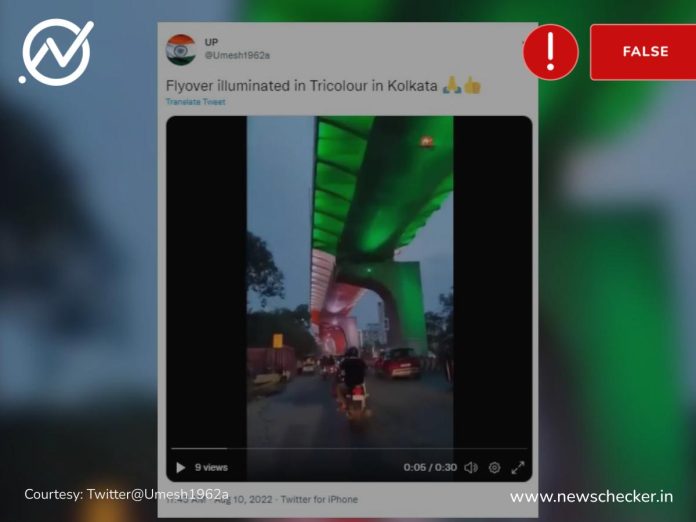 As India celebrates its 75th year of Independence on 15th August, a video of an elevated bridge illuminated with the colours of saffron, white and green is going viral on social media. Users are identifying it to be from different cities.

Facebook page Assam Alert was among those who shared the video on the social media platform claiming that the image was from Hyderabad. The video has 10,000 views and 329 likes.

While several users also claimed that the video is from Borivali in Mumbai, others identified it to be from Kolkata.

We started our investigation by conducting a reverse search image on the key-frames of the viral video to ascertain its authenticity and found the video of Instagram shared by an account named ‘rajastha.n’ on 5th August, 2022 claiming that the video is from Jaipur, Rajasthan.

Upon conducting a keyword search with the words “Jaipur”, “Tricolour”, “bridge”, Newschecker found a video on the official Youtube channel of First India News along with the title ‘On the occasion of Independence Day, Sodala Elevated Road will be illuminated with lights on the theme of tricolour. Jaipur” when translated from Hindi via Google translate.

According to the report, this flyover was the Jaipur Sodala Elevated Road. The reporter spoke with a representative of the Jaipur Development Authority for the video news item (JDA).

Newschecker got in touch with Jugal Kishor Meena, Additional Commissioner (Administration) of the Jaipur Development Authority who confirmed to us that the bridge is the Sodala elevated bridge near Civil Lines in Jaipur.

Newschecker’s investigation reveals that the bridge illuminated with lights of the colours of the tricolour is from the Sodala elevated bridge in Jaipur, Rajasthan.

Vaibhav Bhujang
Vaibhav is a part of Newschecker’s English team, where he spots and debunks all kinds of misinformation, making the rounds on the internet. A Journalism graduate from St. Xavier's College, Mumbai, he holds an M.A degree in Philosophy and an M.Phil from Delhi University.
Facebook
Twitter
WhatsApp
Linkedin
Previous articleOld Video Of Youth Run Over By Security Forces During Muharram Shared As Recent
Next articleEmpty Seats At Laal Singh Chaddha ‘Premiere’? No, Viral Image Is From Press Meet In Chennai, Not Movie Screening