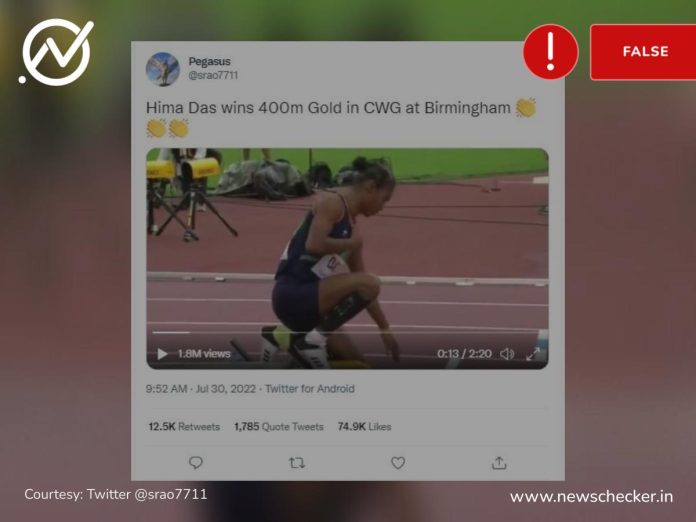 An archived version of the same can be found here.

We began by conducting a keyword search for “Hima Das CWG 2022 Gold” but did not find any credible reports on her alleged win at the Commonwealth Games in Birmingham.

On analysing the video carefully, we could hear the commentator saying “Women’s 400 metres final” in the beginning, “history made at Tampere” at around 1:30 minutes in the viral clip. Taking a clue, we conducted a keyword search for “Women’s 400 metres final Tampere” on YouTube, which led us to a video uploaded on the verified page of World Athletics on August 12, 2021 with the title “Women’s 400m Final – World Athletics U20 Championships Tampere 2018.”

At the counters of 4:22 minutes, we found the viral video claiming to show Das winning a gold medal at the Birmingham 2022.

Further, a keyword search for “Hima Das Gold 2018 Tampere” on Google yielded several reports elaborating on Das’ historic win at the IAAF World U20 Championships in Tampere, Finland. You can read such reports here, here and here.

World Athletics had also tweeted about her victory at the IAAF World U20 Championships on July 12, 2018.

Notably, Das had shared a video on her official Twitter account on July 12, 2022, marking the anniversary of her historic win at Tampere. Captioned “That was the beginning of an endless story on a  white paper. Happy anniversary,” the clip carried several keyframes of the viral video.

In addition, we also came across a tweet by @pibyas, dated July 30, 2022, clarifying that the viral video featuring Hima Das’ victory is actually from the “ World Junior Athletics Championship 2018 not from Commonwealth Games 2022.” An achieved version of the same can be found here.

Thus, we find that the viral posts claiming to show Indian sprinter Hima Das winning a gold medal at the CWG 2022 are false. The video actually shows Das’ historic win at IAAF World U20 Championships in 2018.

Vasudha Beri
Vasudha noticed the growing problem of mis/disinformation online after studying New Media at ACJ in Chennai and became interested in separating facts from fiction. She is interested in learning how global issues affect individuals on a micro level. Before joining Newschecker’s English team, she was working with Latestly.
Facebook
Twitter
WhatsApp
Linkedin
Previous articleWeekly Wrap: False Claims About PM Modi, Eknath Shinde, Misinformation On Yasin Malik’s Hospitalisation & More
Next articleRunaway 14-year-old Called Chitra Grew Up To Be Sudha Murty? Here’s The Truth Behind The Viral Claim