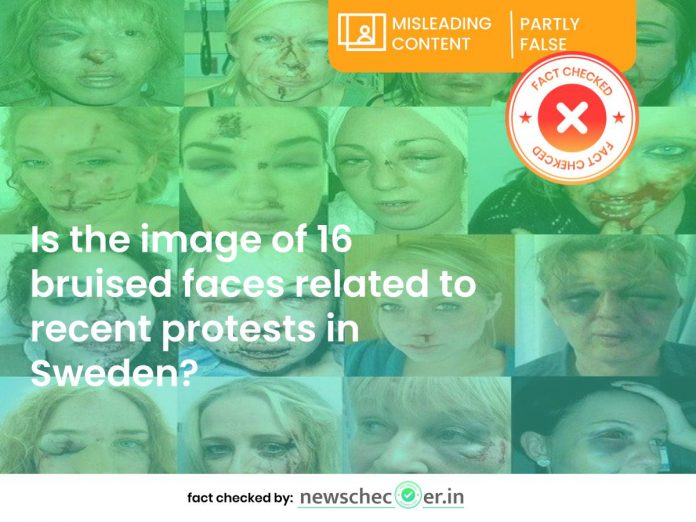 Gaurav Goel, a BJP spokesperson and advocate attributed an image showing 16 bruised faces to Jihadis in Sweden. The image includes photographs of 15 women and one man whose faces show brutal bruises.

Goel’s 29 August tweet with the aforementioned image reads, “Tolerance of Sweden has paved a way for them to be killed. Sweden allowed Jihadis to come and now the citizens of Sweden are brutally killed or injured, that is not an accident…It is a choice they have made. #swedenriots”

This claim is being widely shared on social media after a violent protest broke out in Malmo, Sweden last week. The Guardian reported that violence erupted after a video of followers of the far-right Danish politician, Rasmus Paludan, burning the Quran near the city’s mosque got circulated.

Other social media users have shared similar claims. You can read a few examples below.

Through a reverse image search of the photograph in the claim, we came across an October 2017 article by Mimikama, an Austrian association founded in 2011 providing information about internet fraud, false reports and computer security and to promote media literacy.

Titled, “Fact check on women attacked in Germany,” it verifies each of the 16 photographs from the claim’s image.

Mimikama’s fact check revealed that most images are of individuals from the United States or the United Kingdom. It also states that these individuals were victims of different abuse and violence ranging from domestic to police. It also clarifies that the 16 individuals in the image are not from Germany or Austria as claimed previously.

During our research we also came across a 2018 report by The Observers titled, “How fake images spread racist stereotypes about migrants across the globe.” It includes the collage of 16 photographs depicting bruised people from the claim. Citing the Mimikama article it states, “Most of these photos actually came from the United Kingdom or the United States. The women shown were victims of domestic violence, police violence or random attacks. A couple of the photos do not show victims of attacks at all, but women who are wearing stage or costume make-up. The photo on the far-right of the third line actually shows a British man who was attacked in his home in 2014.”

The above research makes it clear that individuals in the image are not from Sweden nor do they have any connection to the recent protests in Sweden’s city of Malmo. Most of these individuals are from the United States or the United kingdom, and are victims of police violence, domestic abuse, and other attacks.