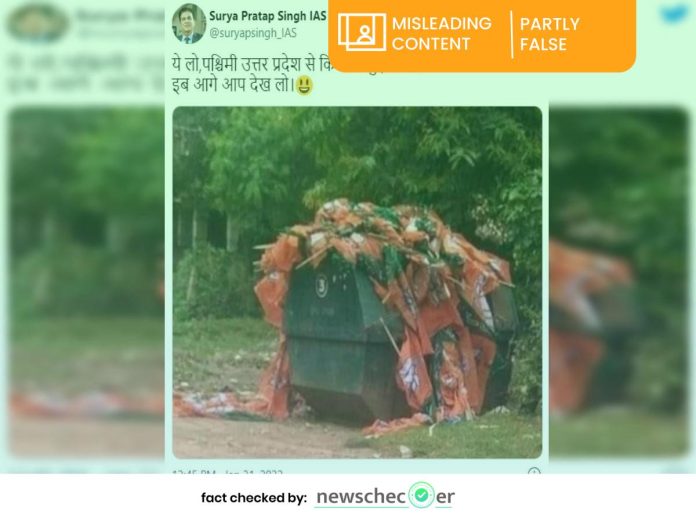 With the first phase of the UP Elections to be held shortly, social media is abuzz with misinformation regarding several political parties hoping to gain the upper hand. One such image has been going viral on social media showing scores of BJP flags discarded in a dumpster along with the title ‘Here, someone from western Uttar Pradesh sent me this image. Now you decide for yourself.’

The image has been shared by Surya Pratap Singh IAS Rtd. on Twitter, who has over 350,000 followers on the platform and also has a Youtube channel. The post has garnered around 23,000 likes and over 4,000 retweets.

The 2022 Uttar Pradesh election for 403 assembly seats will be held in seven phases starting from February 10. Opposition parties and their supporters are trying their best to show anti-incumbency in the state. Yogi Adityanath is set to fight from his constituency in Gorakhpur. Ahead of the first phase social media has become a platform for sharing misinformation regarding several political parties.

Newschecker conducted a Google reverse image search on the viral image to ascertain its authenticity and found a tweet from Dec 4, 2018 on Twitter. The tweet contained the same image along with a caption ‘कमल कीचड़ मे खिलता है ये तो मुझे मालूम था,  मगर झंडा कूड़ेदान मे मिलता है ये हमे मालूम न था’. The caption says that we knew that lotus buds flower in dirty water, but we had no idea that flags bud in dumpsters.

Newschecker also found a tweet shared with the same caption in June, 2021.

Our team also found an article which contained the image by Lokmat news website which was a compilation of the best political memes made in 2018 following the counting of assembly poll votes in five states on December 11. Telangana, Rajasthan, Chhattisgarh, Mizoram and Madhya Pradesh were the five states that held the counting of votes on the day.

Investigation conducted by the Newschecker team reveals that the viral image of BJP flags found in a dumpster is an old image from 2018.

Vaibhav Bhujang
Vaibhav is a part of Newschecker’s English team, where he spots and debunks all kinds of misinformation, making the rounds on the internet. A Journalism graduate from St. Xavier's College, Mumbai, he holds an M.A degree in Philosophy and an M.Phil from Delhi University.
Facebook
Twitter
WhatsApp
Linkedin
Previous article
Tricolour Replaced With A Saffron Flag In Shivamogga? No, Viral Claim Is Misleading
Next article
Video Of ‘Most Honest Candidate’ From 2017 Resurfaces Ahead Of 2022 UP Elections