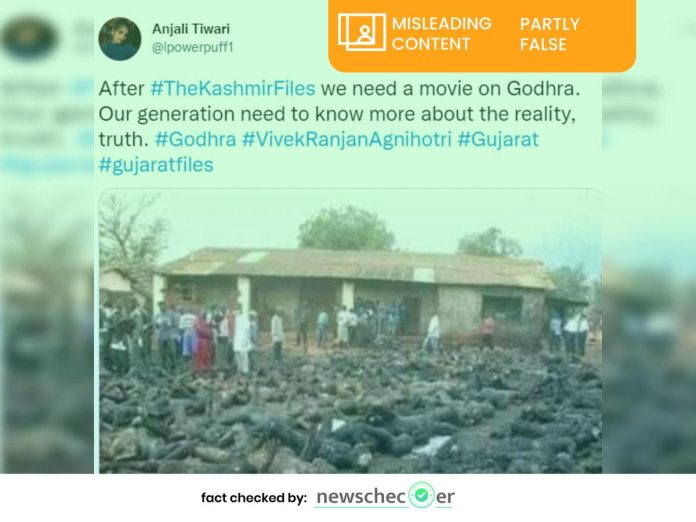 With the release of The Kashmir Files, a film based on the Kashmiri Pandit exodus from the valley, social media has been abuzz with misinformation. One such set of  images has been going viral on social media showing hundreds of charred bodies on an open ground, along with images showing a train up in flames claiming to show the Godhra incident. Newschecker found one of these images to be unrelated to the Godhra incident.

The images were shared by Twitter user @ipowerpuff1. The post has garnered 1,046 likes and 400 retweets along with the caption ‘After #TheKashmirFiles we need a movie on Godhra. Our generation need to know more about the reality, truth. #Godhra #VivekRanjanAgnihotri #Gujarat #gujaratfiles.’

The film, The Kashmir Files is based on video interviews of the first generation victims of the Genocide of Kashmiri Pandit Community In 1990. According to some estimates, notably by the Kashmiri Pandit Sangharsh Samiti (KPSS), more than 70,000 families fled between 1990 and 1992. After the initial success of the film The Kashmir Files, after watching which many viewers were reduced to tears as displayed on various social media platforms. This film has sparked a debate online whether the same treatment be given to the Godhra incident in which a train carrying kar sevaks returning from Ayodhya after demolishing the Babri Masjid were set ablaze killing 58 people, including 27 women and 10 children, and wounded 48 others.

Newschecker conducted a Google reverse image search on the viral image to ascertain its authenticity and found a tweet from 4th December, 2021 which contained the same image from the viral social media post. The caption when translated from Urdu read ‘These are the Muslims of Burma who were burnt but what happened yesterday is also reprehensible. All I can say is stop talking nonsense about Islam and punish the culprits.’ The image had also gone viral in 2021 relating it to the Myanmar incident in which Rohingya muslim villages were burnt down by the Myanmar army.

The archived link of the tweet can be seen here.

Upon further investigation, Newschecker found that the image dates much farther than the Myanmar incidents. Newshecker found a report on a website called Liber Tatea with a picture similar to the viral image.

According to the report, the picture is from an incident in which a fuel tanker exploded in Eastern Congo in which at least 230 people died and 1,500 others were injured.

Upon performing a keyword search, Newschecker found a report from a website called Documenting Reality uploaded in July, 2010. According to the report, an oil-filled truck exploded on a highway in rural eastern Congo, killing at least 220 people, including 61 children and 36 women. The image used in the report matched the image used in the viral social media post.

Upon further investigation, Newschecker found news reports from the BBC and The Guardian which reported this incident.

According to the investigation conducted by the Newscheker team, an image showing burnt bodies laying on the ground was not related to the Godhra incident, but from a fuel tanker explosion in Eastern Congo.

Vaibhav Bhujang
Vaibhav is a part of Newschecker’s English team, where he spots and debunks all kinds of misinformation, making the rounds on the internet. A Journalism graduate from St. Xavier's College, Mumbai, he holds an M.A degree in Philosophy and an M.Phil from Delhi University.
Facebook
Twitter
WhatsApp
Linkedin
Previous article
Did the US Send Its Paratroopers to Ukraine? No, Viral Video is from 2016
Next article
Did US State Of Rhode Island ‘Recognise’ Kashmir Genocide After ‘The Kashmir Files’ Release? No, Vivek Agnihotri’s Claim Is Misleading