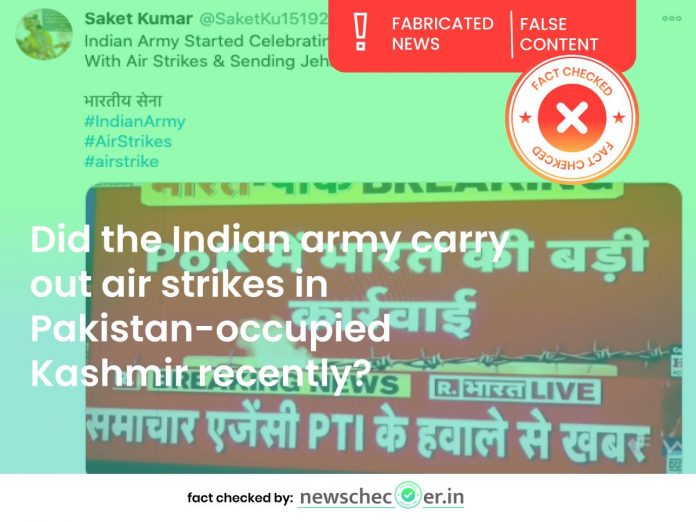 The claims on India’s largest air strike in Pakistan-occupied Kashmir (PoK), terrorist hideouts destroyed, and the army personnel operation being successful has been circulating on Twitter.

This news was shared by media organisations including Aaj Tak, ABP, Republic India, and Amar Ujala. The claim was shared by BJP politicians and others, some of whom later deleted their tweets and revised their articles.

A relevant Google search showed that the claim has been shared on Youtube and by other news organisations in the last 24 hours.

We found that a majority of news organisations and social media users who shared this claim quoted PTI News as a source.

“Spoke to senior Indian Army officials. They have denied @PTI_News report on so called air strike inside PoK. ‘The PTI story is based on analysis of the Ceasefire Violations (CFV) that took place on 13th November. It is clarified that there has been NO firing or CFV in LoC today.’”

A tweet by The Hindu’s defence correspondent, Dinakar Peri denies the claim as well.

The Indian army denied reports that it was carrying out strikes on terror camps in Pakistan-occupied Kashmir, reported ANI.

“Reports of Indian Army’s action in Pakistan-occupied Kashmir across the Line of Control are fake,” Lieutenant General Paramjit Singh was quoted as saying by the news agency.

This has been debunked in our Hindi fact-check as well.

You can read our other fact checks related to the Indian army here.

The claim by media organisations and politicians that the Indian army carried airstrikes destroying terror camps in Pakistan-occupied Kashmir is false. The Indian army has issued a clarification and denied these reports.