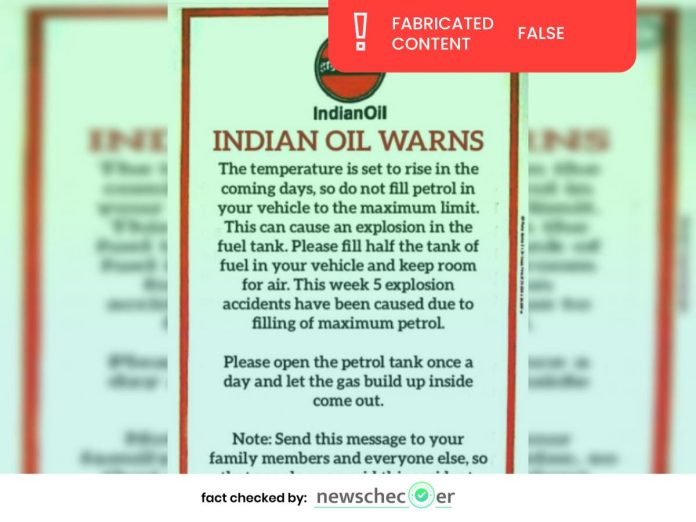 A message claiming Indian Oil Corporation Ltd. issued a warning not to fill fuel tanks to the maximum limit in the summers as they have higher chances of exploding, is going viral on social media.

The viral image posted along with the logo of Indian Oil says “INDIAN OIL WARNS The temperature is set to rise in the coming days, so do not fill petrol in your vehicle to the maximum limit. This can cause an explosion in the fuel tank. Please fill half the tank of fuel in your vehicle and keep room for air. This week 5 explosion accidents have been caused due to filling of maximum petrol. Please open the petrol tank once a day and let the gas build up inside come out. Note: Send this message to your family members and everyone else, so that people can avoid this accident. Thank you”.

The image was shared on Facebook by user Mohammed Waheed Ali along with the caption ‘Note: Important Message from Indian Oil Petroleum  FYI: In the coming few days the heat is going to increase, so don’t use petrol or diesel tank full in your bikes. Telling to fill half tank petrol. 5 cars were torn due to the intensity of heat in this week. Please open the petrol tank of your vehicle once a day.’

Gasoline prices, which have been steadily rising, have risen by about Rs 10 per litre in a span of two weeks. And in a relief, fuel prices have remained unchanged for the past five days. Social media has been abuzz with misinformation since the constant hike in fuel prices.

Newschecker conducted a Google reverse image search on the viral image to ascertain its authenticity but could not find any media reports on the incident.

Upon conducting a keyword search, Newschecker found a tweet uploaded by the verified handle of Indian Oil Corporation Ltd. on 3rd June, 2019 which gave a clarification on the viral post as it had gone viral earlier as well.

According to the clarification statement on Twitter on 3rd June, 2019 , Indian Oil wrote “There are rumours in social media that Indian Oil has given a warning to the following effect: Due to increase in temperature please don’t fill petrol to the maximum limit of the tank; it will cause an explosion in the fuel tank. If you want petrol, fill half the tank and leave the rest for air. IndianOil would like to disown this statement and clarify as follows,” the statement said.

“Automobile manufacturers design their vehicles considering all aspects of performance requirements, claims and ambient conditions with built in safety factors. The maximum volume specified in the fuel tank for petrol/diesel vehicles is no exception. It is therefore perfectly safe to fill the fuel in vehicles up to the full limit (max.) as specified by the manufacturer irrespective of winter or summer.”

Upon further investigation, Newschecker found a Facebook clarification by the official Indian Oil Corporation Ltd. page on 9th April, 2022  which called the viral post as fake.

According to the investigation conducted by Newschecker, the claim that Indian Oil Corporation Ltd. issued a warning to not fill fuel tanks up to maximum capacity as it might explode is false.

Vaibhav Bhujang
Vaibhav is a part of Newschecker’s English team, where he spots and debunks all kinds of misinformation, making the rounds on the internet. A Journalism graduate from St. Xavier's College, Mumbai, he holds an M.A degree in Philosophy and an M.Phil from Delhi University.
Facebook
Twitter
WhatsApp
Linkedin
Previous articleDisturbing Video Of Woman Being Beaten & Stripped in U.P Goes Viral With False Claim
Next articleIs India’s Total Debt As A Percentage Of GDP In Line With That Of Sri Lanka? Viral Claim Is Misleading