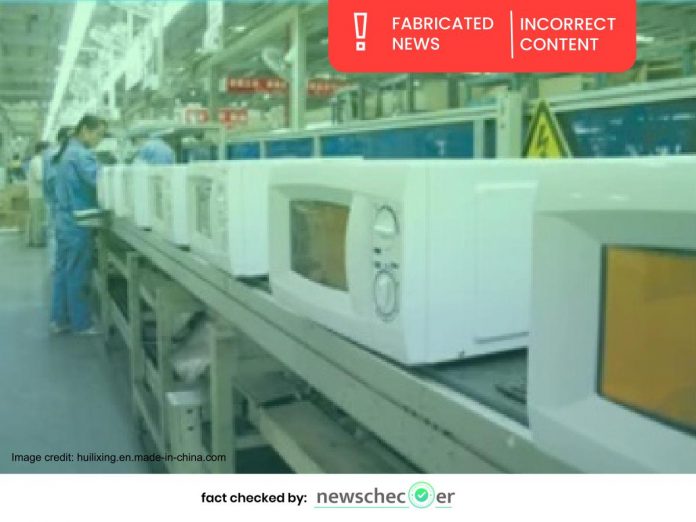 New Delhi: A WhatsApp forward claiming that the Japanese government is doing away with microwaves has been going viral on the chat platform in recent days. The lengthy forward titled ‘End of the Microwave industry’ further claims that the decision was backed by a study from Hiroshima University,  which said that microwaves cause greater harm than atomic bombs. The same has also been widely shared on other social media platforms like Facebook and Twitter. A fact check by Newschecker has found this claim to be false.

On a keyword search, Newschecker came across several articles discussing the same claim. Most of these messages were from 2019, claiming that Japan was going to cease using microwaves by 2020.

According to an article by PIB fact check, the claim was published by a Russian satirical website Panorama.pub. The translation of the headline in the webpage reads “Japan will finally phase out microwave ovens by 2020”.

The article goes on to say that the “the reason for the ban on microwaves in the Land of the Rising Sun was research by scientists from the University of Hiroshima, who found that over 20 years of using microwave ovens, radioactive waves caused more harm to the health of citizens than the nuclear bombing of American aircraft in August 1945.” This line corresponds to the claim made in the viral WhatsApp forward, establishing that it has been picked up from here.

The webpage featuring the article carries a disclaimer “All texts on this site are grotesque parodies of reality and are not real news”.

Furthermore, World Health Organisation clarifies on the radiation aspect of the claim, saying “To dispel some misconceptions, it is important to realize that food cooked in a microwave oven does not become “radioactive”. Nor does any microwave energy remain in the cavity or the food after the microwave oven is switched off. In this respect, microwaves act just like light; when the light bulb is turned off, no light remains.”

The viral WhatsApp forward claiming that Japanese people were soon ending the use of microwave is an old hoax that has resurfaced and is not true.

Pankaj Menon
Pankaj Menon is a fact-checker based out of Delhi who enjoys ‘digital sleuthing’ and calling out misinformation. He has completed his MA in International Relations from Madras University and has worked with organisations like NDTV, Times Now and Deccan Chronicle online in the past.
Facebook
Twitter
WhatsApp
Linkedin
Previous article
Is Government Giving 4000 Rupees Under ‘Pradhan Mantri Ramban Suraksha Yojana’? No, Viral Message Is Spam
Next article
No, Merck’s new drug Molnupiravir is not repackaged Ivermectin