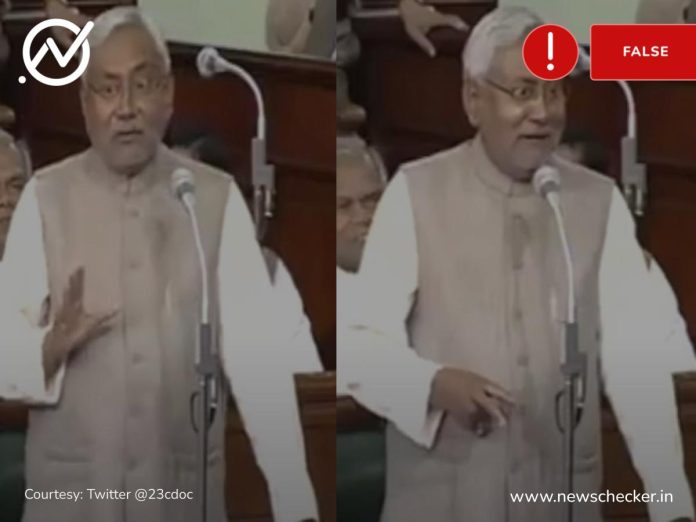 With JD(U) Chief Nitish Kumar once again ditching BJP to join hands with RJD and reviving the “Mahagathbandhan” government in the state, an old video of him, where he can be heard saying that ‘there was no going back’, is being widely shared online. Users who shared the video claimed that the comment was made with reference to RJD, with whom the JDU was in a Mahagathbandhan till 2017, when it split and joined hands with the NDA.

Several Twitter users shared the video to mock the Bihar CM for going back on his own words, and joining hands with the very party he swore not to.

Archived links to such posts can be seen here, here and here.

Tejashwi Yadav had poised himself as the biggest threat to Nitish Kumar’s return to CM office in the last assembly elections in 2020. The campaigning was marked by a bitter war of words, which continued even after the elections. However, Nitish Kumar’s change of heart did not come as a surprise for many. The Chief Minister was reportedly upset over Union Home Minister Amit Shah allegedly foraging within the JDU for defectors. According to reports, Nitish Kumar felt that RCP Singh, a senior leader from his party, who had joined the union cabinet, was being used to turn the JDU against him.

To begin with, Newschecker conducted a keyword search for “रहे या मिट्टी में मिल जाए: नीतीश कुमार” on Google which led us to a report by One India Hindi, dated February 19, 2014, with a title which roughly translates to “Will disintegrate back to the earth, but won’t join hands with BJP: Nitish.”  The report elaborated on an incident in Bihar assembly where CM Nitish Kumar had said that they will come to nothing but won’t join hands with the BJP. “It is impossible, this chapter is over,” the report quoted Kumar saying.

Taking a clue, we conducted a keyword search for “मिट्टी में मिल जाएंगे, “भाजपा”, “ नीतीश” on Google, which yielded several news reports from 2014 on Kumar’s remarks against entering into an alliance with the BJP. One such report by Dianik Jagran, dated February 18, 2014, stated that Bihar CM Nitish Kumar refuted the talks about joining the BJP while addressing the legislative Assembly. The report also quoted the Bihar CM saying that his party will come to nothing but won’t join the BJP.

Another article by Bhaskar also corroborated with the above mentioned report.

Further, we found a longer version of the viral video was uploaded on YouTube channel of First Bihar Jharkhand, uploaded on November 15, 2019 with the title which roughly translates to “When Nitish had said that we will come to nothing, but won’t go with BJP.”

Around 1:25 minutes in the video one of the legistors can be faintly heard saying “There is no chance for you to become a Prime Minister, so what is the fight for,” as Kumar can be seen addressing the assembly and explaining that they drifted away from the alliance because of their principles.

He can further be heard saying, “This incident has taken place after 17 years. We trusted…. That was Atal ji’s era, this is not Atal ji’s era. That’s why Advani ji called us ahead of the split and said that the party chief has assured you…It will be taken care of. But I answered that it was no longer possible for us (to continue). And the chief who gave the assurance is not the chief or (someone) who will listen to all this. So we are going on our own path.”

We further checked the Bihar government website to check the proceedings at the state Legislative Assembly on February 18, 2014. CM’s address begins around 1 hour into the video. Kumar begins his speech taking jibes at the BJP for “encroaching” the bench reserved for the opposition, adding that it rightfully belonged to the RJD as his party and the saffron party had fought the election together. He further goes on to answer the questions raised by the opposition. The portion matching the viral clip can be seen at around 1hour 20 minutes into the video.

Notably, in 2013 the JDU had called off its 17-year-old partnership with the BJP after the saffron party refused to comply with Nitish Kumar’s demand for a public commitment that it would not declare the then Gujarat chief minister Narendra Modi as the prime ministerial candidate.

Viral posts claiming to show Nitish Kumar saying that it is impossible for his party to join hands with the RJD once again are false. The viral clip is from 2014, when Nitish Kumar announced that there was no going back with the BJP, in the Bihar Legislative Assembly.

Vasudha Beri
Vasudha noticed the growing problem of mis/disinformation online after studying New Media at ACJ in Chennai and became interested in separating facts from fiction. She is interested in learning how global issues affect individuals on a micro level. Before joining Newschecker’s English team, she was working with Latestly.
Facebook
Twitter
WhatsApp
Linkedin
Previous article2019 Video Of Idols Bulldozed In Ahmedabad Shared With Political Spin
Next article‘Nitish Sabke Hai’ Poster Not Put Up After Nitish Kumar Dumped BJP, Viral Image Is From 2020