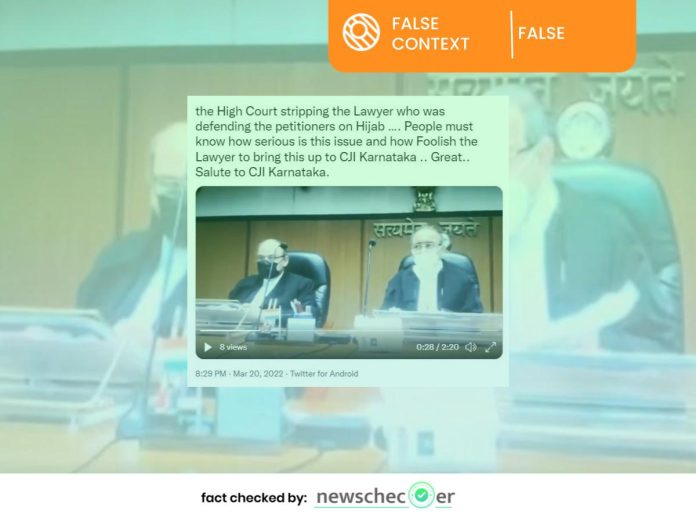 A video claiming to show Karnataka Chief Justice berating a lawyer for “defending the petitioners on Hijab row” is doing the rounds on social media platforms, following the Karnataka High Court’s judgement on pleas pertaining to the controversy over wearing hijab in educational institutions on March 15. The court observed that wearing the hijab is not an essential religious practice and upheld a state government order on adhering to uniform in educational institutions.

In the three minute and thirty-three second-long video, Chief Justice Ritu Raj Awasthi can be seen reprimanding a lawyer. He can be heard speaking, “unfair to the court when similar matter has been dismissed by this court. Are we supposed to remember everything ? …… Call the president of the bar association, immediately we will take action against this person. We will not allow you to practice any more. Mister, you don’t know me.”

Several social media users are sharing the video in context of the Hijab verdict. Newschecker found the video to be unrelated to the hijab case.

The video has been shared by several users on Facebook.

Newschecker also received the same video on our WhatsApp Tipline ( +91-9999499044) requesting to be fact checked.

In December 2021, five students of the Udupi Women’s Pre-University (PU) college were not allowed to attend classes by the college authorities on account of their hijab. The girls continued to attend college and stood outside their classes to mark their protest. Soon after, several educational institutions in the state barred the entry of Muslim female students wearing hjab. This prompted state-wide pro- and anti-hijab protests.

The matter reached the Karnataka High Court last month. On March 15, the court ruled that wearing of hijab by Muslim women does not form a part of essential religious practices in Islamic faith. It observed that prescription of school uniform by the State is a reasonable restriction on the students’ rights to wear a dress of their choice under Article 19(1)(a) and thus, the Government Order issued by the Karnataka government dated February 5 is not violative of their rights.

“It is too far fetched to argue that the school dress code militates against the fundamental freedoms guaranteed under Articles, 14, 15, 19, 21 & 25 of the Constitution and therefore, the same should be outlawed by the stroke of a pen”, the court ruled.

Six Muslim students from Udupi have moved to the Supreme Court against the judgement of the  Karnataka High Court upholding the hijab ban in educational institutes.

Newschecker scanned the comments associated with the video claiming to show Karnataka Chief Justice reprimanding a lawyer over Hijab issue, and found a YouTube link shared by a user @iamthemananiket. The link led us to a video uploaded on the official YouTube channel of Karnataka High Court on March 3, 2022 with the caption, ‘High Court of Karnataka Live Telecast of Court Proceedings of CH-1 on 03.03.2022 at 10.30am.’

At the counters of 35:55 minute, we found the keyframes of the viral clip of the chief justice berating the lawyer. On carefully analysing the video, we could ascertain that the case number is 105 and BBMP is the respondent.

Taking a clue from this, we looked up keywords ‘Karnataka high court bbmp case 105’ on Google and found a list of cases “IN THE HIGH COURT OF KARNATAKA AT BENGALURU ON Thursday THE 3rd Day Of March 2022.”

Newschecker looked up the case on the official website of  the Karnataka High Court and found a judgement dated March 4, 2022 in the case  M Venkatesh V The Commissioner, BBMP.

The commercial appeal was filed under section 37 of the Arbitration and Conciliation Act read with section 13(1)(A) of the Commercial Courts Act. The appeal was made to set aside an earlier order passed by a Bengaluru court and consequently set aside the arbitral award.

We can thus conclude that the viral clip of Karnataka Chief Justice reprimanding the lawyer is not linked to the Hijab case, rather to the  ‘M Venkatesh V The Commissioner, BBMP’ case.

On further research, were found the following observation by the court: “Considering the young age of the advocate and the assurance given by Sri D.R.Ravishankar, learned Senior Advocate appearing for the appellant that in future, Sri G.Sanjay would be more careful and will not commit any such mistake, we do not propose to proceed any further against Sri G.Sanjay, advocate and drop the proceedings at this stage. “

We also found a report by Bar and Bench, which stated, “The Karnataka High Court recently dropped disciplinary proceedings against an advocate upon an unconditional apology tendered by him in court.[M Venkatesh v. The Commissioner, BBMP]”

The viral video claiming to show the Karnataka chief justice ‘stripping’ a lawyer for defending the Hijab petitioners is in fact linked to the ‘M Venkatesh V The Commissioner, BBMP’ case- a commercial appeal.

Vasudha Beri
Vasudha noticed the growing problem of mis/disinformation online after studying New Media at ACJ in Chennai and became interested in separating facts from fiction. She is interested in learning how global issues affect individuals on a micro level. Before joining Newschecker’s English team, she was working with Latestly.
Facebook
Twitter
WhatsApp
Linkedin
Previous article
Youths Stabbed By ‘Muslims’ After Watching The Kashmir Files In U.P? No, Viral Claim Misleading
Next article
Viral Video Of Sikh Man Being Thrashed In Pakistan Is Actually From Ludhiana