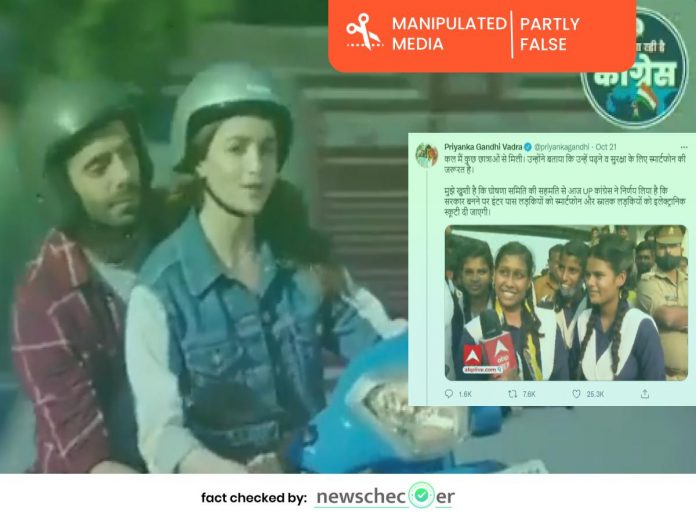 A twenty-one-second-long video of Alia Bhatt was widely shared on Twitter claiming the ‘actor endorsed Priyanka Gandhi’s poll promises’ which includes scooters/scooty for female graduates. Newschecker found that the video was from an advertisement and altered to suit the Congress’ election campaign.

Priyanka Gandhi announced smartphones for class 12 girls and electronic scooties for female graduates on October 21 as part of the Congress’ election manifesto in Uttar Pradesh which is going to polls in early 2022.

In the video, Bhatt can be heard saying, “Priyanka has promised scooties for us, in a few days we will be riding our own scooties,” in Hindi. The video ends with the text, “Congress is coming (to the state).”

The video posted by Twitter user, @Arqum4sure has garnered over 8,000 views and has been retweeted almost 300 times.

To check if Alia Bhatt endorsed the Congress’ poll promise, Newschecker ran a keyword search for ‘Alia Bhatt riding a scooter’ on YouTube. The result led us to an advertisement dated August 2019 on the official ‘Hero MotoCorp’ channel.

In the 44-second-long advertisement, Bhatt is seen riding the same blue scooty -Hero’s pleasure plus- as seen in the viral video.

While visually both the videos are indistinguishable, we found that the audio has been manipulated. In the advertisement which has close to 2,00,000 views, Bhatt can be heard promoting the features of the scooty which had the popular tagline ‘why should boys have all the fun’.

Further, we also found the viral video on the official Twitter handle of Hero MotoCorp also dated August 2019. Bhatt can be heard advertising the features of the 110cc Pleasure Plus scooty in the video and not endorsing Priyanka Gandhi’s poll promises.