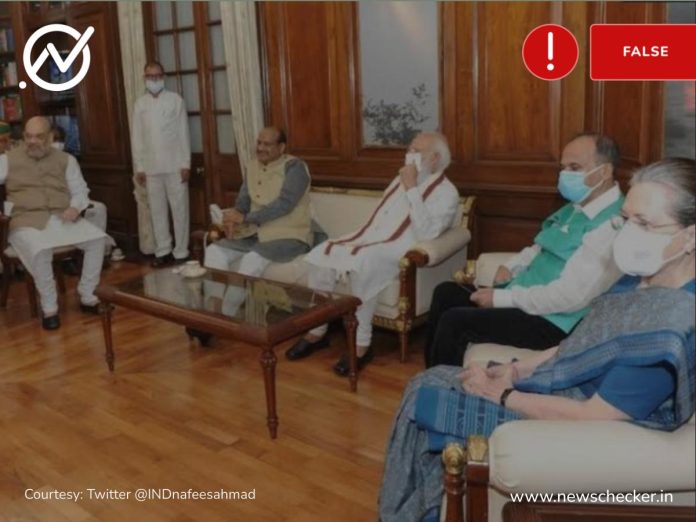 Twitter user @INDnafeesahmad shared the photograph with the caption, “Secret meeting of BJP Congress.  Congress will give BJP a chance to become the Prime Minister in 2024.  Muslims should boycott Congress.  The vote of Muslims will be spoiled if voted for Congress.  because here’s the deal.”

Archived version of the tweet can be seen here.

Several other Twitter users shared the viral photograph questioning whether it shows a “secret meeting” between the Congress and the BJP. The caption of such tweets read, “BJP-Congress secret meeting ? (translated from Hindi) “

Also Read: Did Sonia Gandhi Sideline ‘Prime Minister’ Manmohan Singh During A Meeting? No, Video From 2017 Viral With Misleading Claim

We looked up the photograph on Google lens which led us to a report by Hindustan Times, dated August 12, 2021, titled ‘PM Modi, Sonia Gandhi at Speaker’s meet with parties post Lok Sabha adjournment.’

It carried a photograph showing PM Modi, Sonia Gandhi and other leaders in the same attire, sitting arrangement and identical background as seen in the viral image. The report stated, “Prime Minister Narendra Modi and Congress president Sonia Gandhi joined other party leaders in Lok Sabha Speaker Om Birla’s chamber after the acrimonious monsoon session was adjourned sine die… The two leaders, however, didn’t speak to each other, according to two leaders present in the meeting.”

Following this, we conducted a keyword search for “Modi,” “Sonia Gandhi” “meet” Lok Sabha adjournment” & “August 2021” on Google which yielded a report by The Tribune, dated August 11, 2021.

Displaying the viral photograph, the report elaborated, “After days of disruptions and bad blood between the government and the opposition in the Monsoon Session of Parliament, there were happy faces today at a meeting of leaders called by Lok Sabha Speaker Om Birla post the adjournment of the House this morning… Also present in the meeting held at the Speaker’s chamber were Home Minister Amit Shah and leaders of all Opposition parties in the Lok Sabha.”

Multiple other news outlets had reported on the meeting called by Lok Sabha speaker Om Birla with the political leaders of various parties after the monsoon session of the parliament was concluded in August 2021. Such reports can be seen here, here and here.

Viral post claiming to show a photograph from a “secret” meeting between BJP and Congress leaders ahead of the 2024 General Elections is false. It shows visuals from a meeting of leaders from various political parties called by Lok Sabha speaker Om Birla after the conclusion of the monsoon session of the Parliament in August 2021.