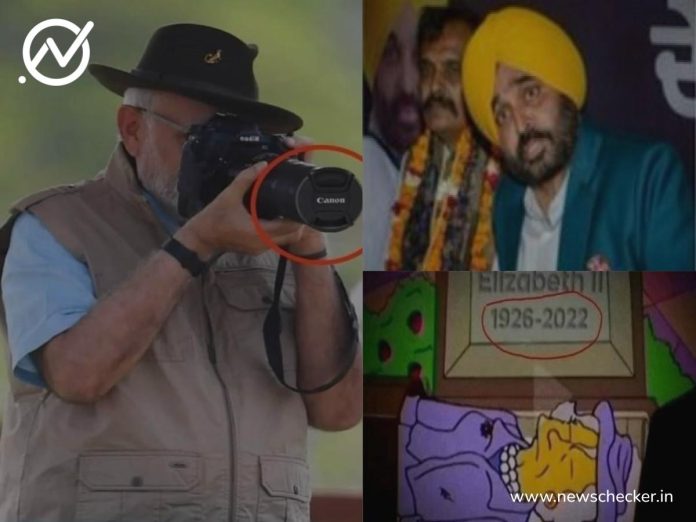 From Queen Elizabeth II’s funeral, to anti-hijab protests in Iran from Bhagwant Mann’s alleged deplaning to Bharat Jodo Yatra and Project Cheetah, the past week witnessed a slew of newsworthy events. And as is the nature of social media, soon had misinformation sprouting around the same. Here is a look at the top 5 fact checks by Newschecker this week.

Following Queen Elizabeth II’s death, several social media users claimed that iconic American animated sitcom ‘The Simpsons’ had predicted the British monarch’s year of death in one of the episodes that aired in early 2000s.Viral posts claiming that ‘The Simpsons’ predicted Queen Elizabeth II’s year of death were found to be false as the cartoon did not have any episode depicting the monarch’s death and that the viral image and video are altered.Read more here.

A newspaper clipping attributed to German Times claims that a Lufthansa flight from Frankfurt to Delhi which was supposed to carry Bhagwant Mann was delayed because the Punjab CM, who was too drunk, had to be deboarded. Our investigation revealed that the viral article was staritcal in nature. The German Times also confirmed to Newschecker that they published no such story. They further told us that the organisation last published a printed copy of the newspaper 2 years ago. Read more here.

Last week, PM Narendra Modi released the cheetahs, that were translocated from Namibia, into the wild on his 72nd birthday and was captured trying to photograph them as they explored their surroundings immediately after leaving their cage. In this background, an image is being circulated claiming that PM was using the camera with its lens cover on. Newschecker found that the image was digitally altered. The original image shows PM Modi taking pictures of Cheetahs with the camera lens cap off. Read more here.

Hours following her detention by Iran’s dreaded morality police for allegedly violating the hijab regulations, Mahsa Amini, 22, went into a coma. Witnesses accused the police of beating her. Mahsa Amini has since passed away. In this context, a video of a police officer manhandling a woman is going viral on social media claiming to show police brutality against Amini. Newschecker found the video to be old and unrelated to Amini’s detention. Read more here.

A black-and-white video showing the first Prime Minister of India, Jawaharlal Nehru, being honoured in what appears to be an  official ceremony, is going viral on social media platforms. The video has prompted social media users to believe that India’s first PM had taken London’s citizenship. Newschecker found that claim to be misleading. The video actually shows visuals of Pt Nehru receiving honorary Freedom of the City of London in 1956. Read more here.

Vasudha Beri
Vasudha noticed the growing problem of mis/disinformation online after studying New Media at ACJ in Chennai and became interested in separating facts from fiction. She is interested in learning how global issues affect individuals on a micro level. Before joining Newschecker’s English team, she was working with Latestly.
Facebook
Twitter
WhatsApp
Linkedin
Previous article
Bharat Jodo Yatra: Woman In Viral Photograph With Rahul Gandhi Is Not Amulya Noronha, Who Raised Pro-Pak Slogans At CAA Protest
Next article
2015 Video Of Tianjin Blast Shared As Recent Video From Beijing In Wake Of Xi Jinping Coup Rumours