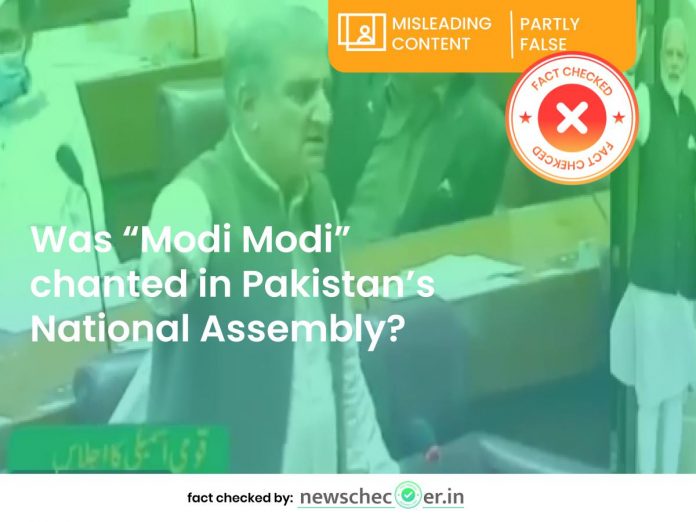 A video with the claim that opposition in Pakistan’s parliament chanted “Modi Modi” is viral on social media platforms. One such claim shared by a Twitter user reads,

“We have all heard ⁦@narendramodi⁩ slogans in India!! Massive embarrasment for Pakistan & Imran as Opposition in Pakistan Parliament chants “Modi Modi” There goes Lahoria’s dreams of contesting in Pakistan”

News Nation TVs consulting editor, Deepak Chaurasia shared the video with a similar claim which reads, “Lo Bhai Modi-Modi slogans in Pakistan’s Parliament. It is now a tableau Lahore Karachi is due”

Times Now Bureau published an article on the same.

Earlier this month, a French teacher, Samuel Paty, was knifed to death after showing a caricatures of Prophet Muhammad in class. Before that the French President Emmanuel Macron critiqued Islam calling it a religion “in crisis.” Islamic countries retaliated to Macron’s comments saying it would encourage public sentiment against Muslim sentiments.

Through a relevant keywords search on Google, we came across a Youtube video titled, “Shah Mehmood Qureshi Speech in National Assembly”. The 17 minute video was posted by Dunya News on 26 October.

On slowing down the video and keenly listening we could clearly hear the opposition members in Pakistan’s National Assembly shouting “Voting Voting” not Modi Modi”. However, it’s worth noting that Shah did mention PM Narendra Modi in his speech, but there was no chanting his name.

Further, we came across a 27 October article by Dawn, which reads, “Foreign Minister Qureshi read out another resolution that the government wanted to be passed with consensus on the issue of blasphemy. With opposition members chanting “voting! voting!” for the resolution presented by Asif, a furious Qureshi accused the opposition of “doing politics” on the sensitive matter.”

This claim was debunked in our Hindi fact check earlier today.

Our research makes it clear that “Modi Modi” was not chanted in the National Assembly of Pakistan. The claim by individuals and certain media organisations is misleading.