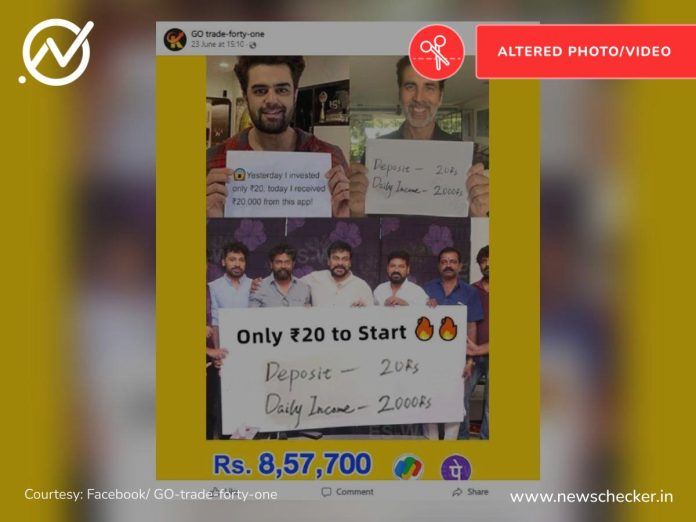 An image is being shared on social media in which actors Chiranjeevi, Akshay Kumar and Manish Paul are seen holding a placard promoting an online trading app. The placard reads  “Deposit 20Rs – Daily income 2000Rs”. Newschecker found these images were morphed with the placard replaced with a different text.

The image has been shared by a Facebook page named ‘GO trade-forty-one’. The Facebook bio of the page reads ‘GOTRADE is the fastest growing broker in recent years. We provide a high-tech platform for trading the most popular financial market assets: currency EUR/USD, GBP/USD, cryptocurrency and other assets.’

We started our investigation by conducting a reverse search on the images on Google and found an article by Lokmat Times titled Akshay Kumar thanked Corona warriors, see photos when translated via Google uploaded on 9th April, 2020. In the article actors, Akshay Kumar and Manish Paul can be seen holding placards which say “#DILSE THANKYOU” which matches the image used in the viral post.

Actors Akshay Kumar and Manish Paul had posted on their social media handles thanking all the corona warriors including doctors, policemen, nurses along with others for their efforts during the first Covid-19 lockdown.

On further conducting a reverse image search on Google, Newschecker also found an article by Filmy Focus titled Chiranjeevi, the first audience member! Uploaded on 3rd August, 2017. The article contained the same image as the one in the viral image without the placard being morphed.

According to the article, the image is from the premiere of the Telugu movie Darsakudu. Chiranjeevi purchased the first ticket, making him the movie’s first spectator. In the image actor Chiranjeevi is seen holding a giant movie ticket. The actor, along with others, had gone to the event for the film’s promotion.

Newschecker’s investigation reveals that morphed images of placards held by actors Chiranjeevi, Akshay Kumar and Manish Paul are being shared along with the caption Deposit 20Rs – Daily income 2000Rs.

Vaibhav Bhujang
Vaibhav is a part of Newschecker’s English team, where he spots and debunks all kinds of misinformation, making the rounds on the internet. A Journalism graduate from St. Xavier's College, Mumbai, he holds an M.A degree in Philosophy and an M.Phil from Delhi University.
Facebook
Twitter
WhatsApp
Linkedin
Previous articleSpoof Video Goes Viral Claiming To Show Mick Jagger Predicting Impact Of Internet In 1999
Next articleDid India Nosedive ‘From 3rd Largest Economy In 2011 To 164th in 2021’? Know The Truth Here