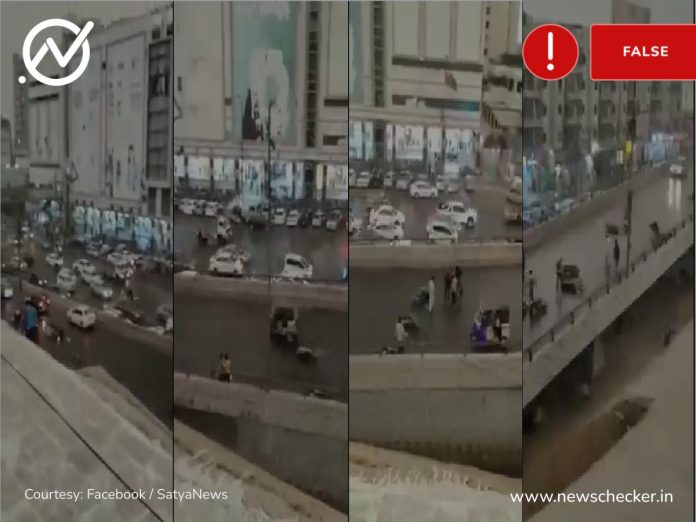 (This article was originally published in Gujarati by Prathmesh Khunt)

A video showing multiple motorbikes skidding on a flyover one after the other, allegedly due to heavy rains, causing chaos on the road, is going viral on social media, with users identifying the location of the accident as Sanpada station bridge in Navi Mumbai. Newschecker found that this video is from Pakistan.

Several other users also identified the location as Hyderabad.

The monsoons officially started in India in 29th May, and has since been unevenly spread throughout the country. Heavy rains have resulted in flooding in several parts of the north east.

We started our investigation by conducting a reverse image search on the key-frames of the video on Google and found an article by Republic World titled Pakistan: Several Motorcyclists Fall On Slippery Road In Karachi Amid Heavy Rain; Watch uploaded on 26th June, 2022. According to the report, the incident took place on a flyover on the road near Millennium Mall in Karachi on Wednesday, June 22, after heavy rains lashed parts of the city.

Upon further investigation based on the information received on the incident we found  reports published on the incident by Pakistani media institutes Pak Live Tv and Geo.tv. According to the reports, heavy downpour lashed various areas of Karachi following an unexpected dust-storm on Wednesday evening. Amid the heavy showers, rain water accumulated on the roads in different areas of the metropolis, with slippery roads causing many motorcyclists to fall and get injured while riding.

View of Rashid Minhas Road can be seen here on Google Maps . Also, a similar video was posted on Twitter by journalist Zia Ur Rehman on June 22, with the caption provided as ‘Accident due to slippery roads during and after rains in Karachi, these are scenes from the Millennium Mall.’

Newschecker’s investigation reveals that the video, which went viral with claims that motor bike riders were slipping on Mumbai’s Sanpada Bridge, is actually a June 22 incident in Karachi, Pakistan. The incident took place on a flyover on the road near Millennium Mall in Karachi after heavy rains lashed parts of the city.

Vaibhav Bhujang
Vaibhav is a part of Newschecker’s English team, where he spots and debunks all kinds of misinformation, making the rounds on the internet. A Journalism graduate from St. Xavier's College, Mumbai, he holds an M.A degree in Philosophy and an M.Phil from Delhi University.
Facebook
Twitter
WhatsApp
Linkedin
Previous article
3D Printed Suicide Pod Legalised In Switzerland? Viral Claim Is False
Next article
Mamata Banerjee ‘Learning To Drive Scooter’? No, Old Video Goes Viral With False Claim