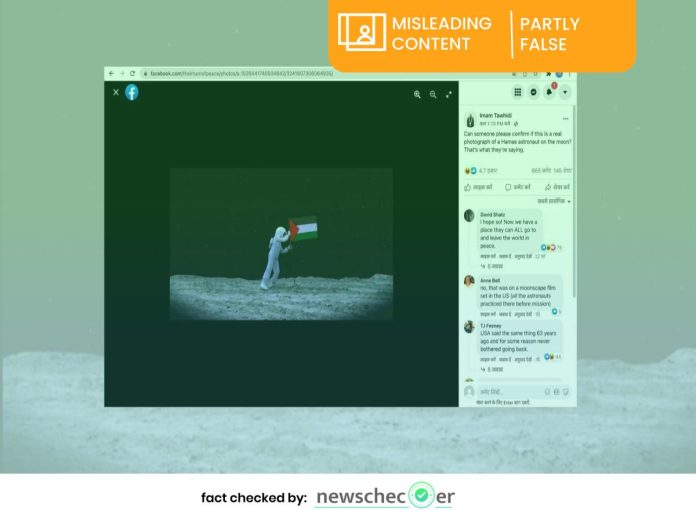 Old pictures resurfacing with different contexts has become a common occurrence on social media, and so has posters and stills from movies being passed off as real incidents.

One such recent incident is the claim about Hamas— a Palestininian military group— landing on the moon!

Facebook user @theimamofpeace shared the picture of an astronaut placing a flag on the moon with the caption “Can someone please confirm if this is a real photograph of a Hamas astronaut on the moon? That’s what they’re saying.”

The post had garnered 5523 interactions on the platform, including 144 reshares at the time of writing this article.

Hamas is an acronym for ‘Ḥarakat al-Muqāwamah al-Islāmiyyah’. As per Britannica, it is a militant movement in Palestine fighting to form an independent Islamic State in Palestine.

To ascertain the authenticity of the claim made by the post, Newschecker ran a reverse image search on google along with relevant keywords.

The google search results led us to a website ‘www.jadaliyya.com’, which led us to an article from 2011 titled ““A Space Exodus”: A Truly Palestinian Film”.

“Jadaliyya is an independent ezine produced by the Arab Studies Institute (www.ArabStudiesInstitute.org)” says the website.

The article hints that the image used refers to a film  A Space Exodus by Larissa Sansour.

We googled the film name and were led to the website of Larissa Sansour. Sansour is a Palenstinian artist who is the director of the film ‘A Space Exodus’.

A thorough check of the website confirmed that the image in question was a screengrab from the trailer of the film ‘A Space Exodus’.

Internet Movie Database’s (popularly known as IMDb) page on the film says that ‘A Space Exodus’ is a 2008 film which is the first part of Larissa Sansour’s science fiction trilogy.

This is also confirmed by the website of ‘Mec film’, which is ‘an international sales and distribution company exclusively for films by Arab directors’, as per its website.

Thus, we find that the image is not of Hamas landing on the moon but is a screen grab from the movie ‘A Space Exodus’.

The image being circulated with the false claim of Hamas landing on the moon is actually from a 2008 movie made by Larissa Sansour.

Preeksha Malhotra
Preeksha is a journalism graduate interested in exploring and working on the phenomenon of fake news globally. She desires to work on compelling stories that employ digital journalism to bring forth narratives that matter. She is also a budding researcher, studying the COVID-19 infodemic as a research fellow with the Institute of Economic Growth.
Facebook
Twitter
WhatsApp
Linkedin
Previous article
Video Of Ayyappa Devotees Singing ‘La Ilaha Illallah’ Shared Out Of Context With Communal Claim
Next article
No, This Is Not Kandla Gorakhpur Gas Pipeline! Viral Image Is From Germany