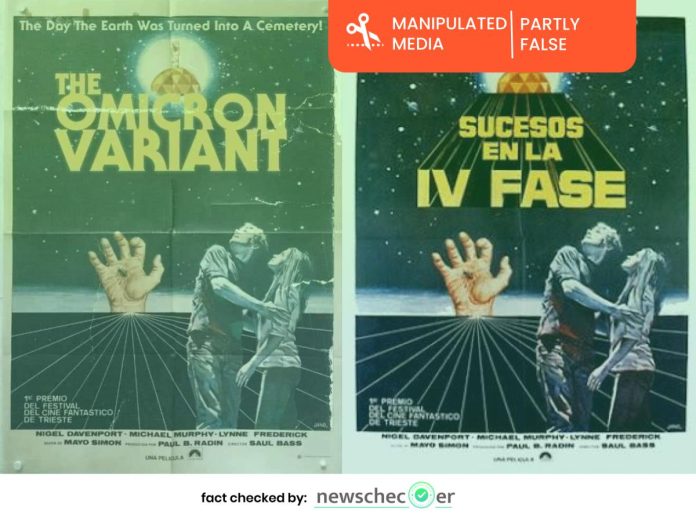 Several social media users shared an image of a vintage-looking movie poster titled ‘The Omicron variant’ to claim that the newly detected Variant of Concern (VOC), B.1.1.529, named the Omicron variant, was predicted way back in a 1963 movie. Newschecker found the viral image to be an edited version of a sci-fi movie poster from 1974 called, ‘Phase IV.’

The poster shows a caricature of two young people looking up at the starry night sky. The poster also shows a hand reaching out in the background with what appears to be an ant placed on it. A few Twitter users including Bollywood director, Ram Gopal Verma, shared the image by pointing to the tagline in the poster that reads, ‘The Day The Earth Was Turned Into A Cemetery,’ archived link here.

The image is being widely shared with captions such as, ‘Was Everything Pre-Planned?’ and ‘The Omicron variant becomes true. This film came in 1963.’

To verify the authenticity of the poster, Newscheker ran a reverse image search on the viral image and found the wording of the poster to be altered.

The original poster available on a Spanish shopping website called Todocoleccion shows the title of the movie to be ‘Sucesos En La IV Fase’ which is the Spanish title of the American Sci-fi movie ‘Phase IV.’

On searching for the movie on the Internet Movie Database (IMDb) website, we found Phase IV is a 1974 film directed by Saul Bass, in which “Desert ants suddenly form a collective intelligence and begin to wage war on the inhabitants. It is up to two scientists and a stray girl they rescue from the ants to destroy them.”

The movie is not related to the Omicron strain which was first detected in South Africa on November 09 or to the Coronavirus pandemic.

Further on running a keyword search on Twitter, we found a post by user Becky Cheatle who has shared three vintage-looking movie posters, with text, “I Photoshopped the phrase “The Omicron Variant” into a bunch of 70s sci-fi movie posters #Omicron” on November 28.

One of the images shows the viral movie poster which netizens believed to be a movie from 1963  on the Omicron variant.

Newschecker reached out to Cheatle who confirmed that she made the viral poster as a joke.

“Yes, I made the posters, as a joke, because I thought ‘the omicron variant’ sounded like a 70s sci-fi movie title. It never occurred to me that anyone would take it seriously. It was never my intention to spread misinformation and I hope no one gets sick as a result,” she said to Newschecker in a text message.

While there is no movie titled ‘The Omicron Variant,’ there is an Italian movie titled ‘Omicron‘ in which, “An alien takes over the body of an Earthman in order to learn about the planet so his race can take it over.”

Omicron was directed by Ugo Gregoretti and released in 1963, but this movie does not make any reference to the novel Coronavirus pandemic or the Omicron strain.

An edited movie poster titled ‘The Omicron Variant’ was widely shared to claim the variant was already predicted back in 1963.